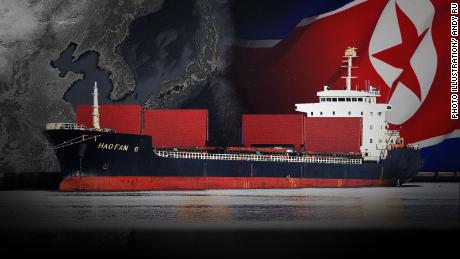 Hong Kong (CNN)The United Nations brought down the hammer and that was it for the Hao Fan 6.

On October 10, the hulking, 460-foot (140 meter) cargo ship was banned from entering every single port across the globe, punished for violating sanctions on North Korea.
It was just south of South Korea the day the news was announced, according to tracking information by MarineTraffic. Its transponder pinged continuously until 11:17 p.m. Coordinated Universal Time, the data showed.
Then the Hao Fan 6 disappeared.
The Hao Fan 6 seen in South Korea in 2015.

Read More
The Hao Fan 6 was one of four ships the UN slapped with global port bans.
But it's not the first time North Korean ships have been sanctioned. The Jie Shun, one of the four banned ships, was caught by Egyptian authorities smuggling thousands of North Korean rocket-propelled grenades in 2016. Panamanian authorities detained the Chon Chon Gang in 2013 after finding MiG fighter jets, anti-aircraft systems and explosives hidden under bags of sugar.
Now, the net seems to have widened. The UN has recently passed resolutions blocking North Korea's ability to export goods like coal and metal ores -- big moneymakers for Pyongyang, that help fund everything from the lavish lifestyles of North Korea's elite to its rapidly advancing nuclear and missile programs.

"Shipping is the area that is in the most trouble now given the squeeze by the sanctions."

US Secretary of State Rex Tillerson renewed the call after North Korea tested a long-range ballistic missile in late November. He said the international community needs to take additional measures against the country, "including the right to interdict maritime traffic transporting goods to and from the DPRK (Democratic People's Republic of Korea)."
"Shipping is the area that is in the most trouble now given the squeeze by the sanctions," said George Lopez, a former member of the UN Panel of Experts on North Korea who now teaches at the University of Notre Dame. "Once you're in a situation like you are in now, when there's virtually no exports allowed, then you get a chance to really interdict virtually everything."
The sanctions dovetail with US President Donald Trump's plan to quash North Korea's nuclear march by putting together a global coalition dedicated to cutting off North Korea's cashflow. The hope is to eventually get the hermit nation's leader, Kim Jong Un, to relinquish his nuclear arsenal in exchange for sanctions relief.
The US Treasury Department has gone even further than the UN, sanctioning 59 vessels for their dealings with North Korea. But independent North Korea watchers have identified as many as 180 ships connected to the hermit state, which begs the question: How many North Korean ships like the Hao Fan 6 are still roaming the high seas, bringing in cash for the Kim regime?

The Hao Fan 6's journeys in the weeks before the ban show the massive ship, which can transport 8,343 tons of cargo, appearing to travel on land across large swaths of South Korea.
These aren't errors. They're clues.
<image src="//cdn.cnn.com