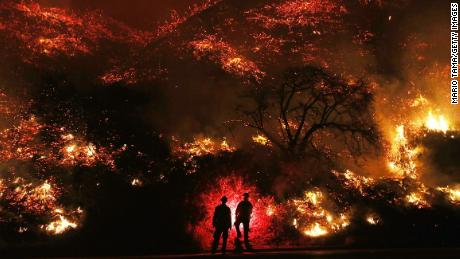 Firefighters monitor a section of the Thomas Fire along the 101 freeway on December 7, 2017 north of Ventura, California.

The wildfires in California just keep shattering records this year

(CNN)The catastrophic wildfires of 2017 didn't just destroy neighborhoods and livelihoods -- they also annihilated records. And the destruction's not over. The Thomas Fire, which has torched the equivalent of Dallas and Miami combined, is still raging in Southern California.

Here's a look at the records obliterated by the 2017 wildfires:

The costliest in US history

Damage estimates from the 2017 wildfires topped $10 billion, said Adam Smith of the National Oceanic and Atmospheric Administration. And that was before devastating wildfires tore through Southern California in December.

The most acres burned in California in the last 5 years

Read More
For the past five years, wildfires scorched an average of 202,751 acres from January 1 through December 24, according to state fire protection agency Cal Fire. That number doubled in 2017. More than 505,900 acres have gone up in flames so far in California. That's triple the area of Chicago.
Flames consume a home as a wildfire burns in Ojai on December 7, 2017.

The worst for air pollution in the Bay Area

The October wildfires in Northern California caused "unprecedented levels of air pollution throughout the Bay Area," air quality officials said. To put things in perspective, air quality is considered "very unhealthy" when the index reaches 201. At one point, the air quality index in parts of Napa reached 486.

The biggest in modern California history

The Thomas Fire started on December 4 and hasn't stopped since. As of Tuesday, it's destroyed more than 281,000 acres and was 88% contained. This Southern California inferno is the biggest wildfire in California since it least 1932.The Thomas Fire is the seventh most destructive, with at least 1,063 homes, businesses and other structures destroyed. That number is sure to grow, since fire officials said the fire might not be fully controlled until January 7.