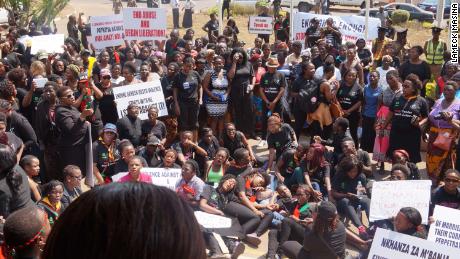 Cycle of shame: Harassed in the street, then again on social media

By Rossalyn Warren, for CNN

Editor's Note: CNN is committed to covering gender inequality wherever it occurs in the world. This story is part of As Equals, a year-long series.

Lilongwe, Malawi — In a grainy mobile phone video that went viral last year, three women are seen stripping another woman naked, pulling her hair, dragging her to the ground and smashing a flower pot over her head.
The video of the assault, filmed by one of the women, spread among closed WhatsApp groups before circulating on Facebook in Malawi. It gripped the country, sparking a national conversation about gender-based violence.
A few days later, an image of the same three women surfaced online. They were pictured topless, sitting on the cement floor of a police station.
While social networks have helped to advance women's rights in Malawi, they've also become an amplifier for an existing culture of abuse.
Read More
These are three stories of how women in Malawi have been sexually harassed in public, humiliated online, and subjected to a cycle of shame. Each involves a photograph taken without the women's consent; in two, the women are naked or partially clothed. To highlight the issue at the heart of the story, CNN has chosen to republish the photographs. In order to not further fuel the cycle of shame that the women described, we have removed them from the images.

They attacked a woman, before being stripped themselves

In the original image, which circulated on WhatsApp, the three women were pictured naked in a police cell.
Violence against women in Malawi has long been an issue. According to the 2015-16 Malawi Demographic and Health Survey, 20% of respondents said they had endured sexual violence and 34% reported they had suffered physical violence.
Patriarchal values only add to the problem. The same survey found that 20.7% of women aged 15-19 agree a husband is justified in hitting his wife for reasons such as refusing to have sex or burning his food.
Flora Chinguwo, 26, believed her husband was cheating with the woman she attacked. Now Chinguwo is in jail alongside Nora Chatsika, 30, and Gertrude Banda, 28, who helped her carry out the assault. As both victims and perpetrators, the women reveal how deeply embedded attitudes toward gender-based violence are in Malawi.
"We're going through a lot," Chinguwo told CNN, "our families and children are on the outside, and we miss them."
The women say they were rejected by a number of lawyers, who deemed the case too controversial, before Ishmail Wadi, a prominent local lawyer based in the capital Lilongwe, decided to represent them.
When Wadi first met the women, they told him they were assaulted and abused by officers in Kawale police station. They claim they were stripped naked and photographed, abused until 3 a.m. when a senior officer intervened.
"One of the women was in tears, crying, when she explained to me that they had been taking pictures of them," Wadi explained. "Other male detainees were present and invited to watch. They were stripped off and made to sleep in a toilet, and were only given their clothes back when a senior officer came on scene."
Wadi says the women provided evidence about who assaulted them in a disciplinary hearing.

"Other male detainees were present and invited to watch," Ishmail Wadi said. "They were stripped off and made to sleep in a toilet, and were only given their clothes back when a senior officer came on scene."

Malawi's National Police Spokesperson James Kadadzera confirmed the police were conducting an internal investigation into the incident to identify who from law enforcement was involved.
Although social media helped document the mistreatment the women endured, their viral video of the crime also heavily influenced the public's view, Wadi says.
Many members of the public attended their hearing after seeing the video on social media, jeering and shouting abuse at the women in the court, even trying to attack them, said Wadi. He decided to remove the women from the courtroom, bringing them back in the afternoon when the crowd had dispersed.
"The reaction from the public was horrific," Wadi said. "We did not have a fair trial because of social media."
"The public response has been especially hostile because we're women and we attacked a woman," Chinguwo said. "Emotion played a big role in how people saw u