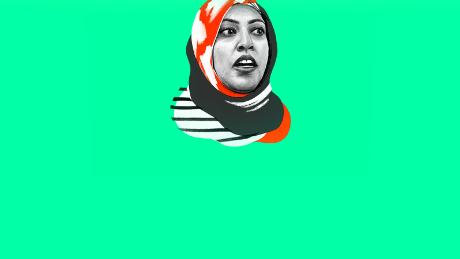 Nadia Al-Sakkaf is a researcher specializing in gender and politics. She was the first Yemeni woman appointed as Information Minister. Before that she was The Yemen Times Chief Editor. She is currently a PhD candidate at Reading University in UK. The opinions in this article belong to the author.
It was an all-female gathering after a funeral for a family mourning their son, killed in Yemen's on-going civil war.
The interesting thing about this gathering was that there were relatives present who were fighting on opposing sides of the conflict.
Nevertheless, the women came together in grief. They were simply women talking about losing their sons to the war and about how life has become so hard for everyone in Yemen.
The conflict, which started in 2014, has claimed the lives of many Yemenis directly through combat or through disease and hunger. UN statistics said that up until September 2017, over 5,000 people had been killed in the war -- 20% of which were children.
Read More
But the war has also had a much longer-term impact on Yemeni society: it has changed the country forever -- especially for women.
It is Yemen's women who during the conflict have maintained the social fabric of society and kept communities together. They are the nurturers, mediators, peacemakers, and keepers of tradition.
Because of the conflict, the entire socio-cultural balance of the society has been tipped over.

"It is Yemen's women who during the conflict have maintained the social fabric of society and kept communities together."

Across Yemen, women find themselves in charge of managing the poverty afflicting their communities -- and they do so with very few resources and, in some cases, no qualifications.
They bake bread at home and sell it. Some have become maids and offer their cleaning services to others for little money.
Very few women have gone through what one would call empowerment, as they are not really acquiring more power.
Instead, they are being given more responsibilities. In some cases, this gives them more freedom of mobility as they are forced out of their homes in search of income. It is not that cultural values have changed; it's that war has increased the burden on women.
It's not just a fear for their lives or economic insecurity that has placed so many Yemeni women in this situation. It is also the lack of routine, such as children not knowing whether they can or should go to school, parents not knowing whether they have a source of income or how to put food on the table and sick people not having access to healthcare. The list of basic needs goes on.
The situation in Yemen was bad before the war. But with the conflict, it has reached unprecedented levels of desperation.

"Very few women have gone through what one would call empowerment, as they are not really acquiring more power."

How does a Yemeni mother, wife, sister or caretaker appease her loved ones and take care of her responsibilities when she has nothing to work with? The social gender power balances in Yemen have always favored men over women, but the conflict has made matters worse as men take their position as decision makers at all levels across all fields.
Even during humanitarian aid delivery, it is usually men who take charge and decide where and how to distribute aid -- if it is distributed at all.
But as the instability extends over the course of the conflict, women are gradually finding themselves in charge, as the men in their lives are either killed, out fighting, or become too depressed to be useful. The problem of being in charge without basic resources is a very consuming one.
<div class="zn