Inside the mind of a suicidal sports star: I wanted ‘to kill myself,’ recalls Leon McKenzie

He is now speaking out to help other young men

Suicide is the biggest killer of men under 45 in the UK.

One person takes their life every 90 minutes – the same amount of time it takes to play a match of football.

Former English footballer Leon McKenzie, who made his name as a prolific goalscorer in the late 90s and early 2000s, is hoping he can help others by speaking out about his own mental health issues.

It was in 2009, while playing for third tier side Charlton Athletic, that McKenzie decided to try and kill himself by overdosing on pills in his hotel room.

“That led to, fortunately, me waking up in hospital and having another chance.”

READ: Michael Phelps – ‘I locked myself in my room for four days’

McKenzie believes the stigma surrounding “judgment” of people with mental health and men’s “pride” are the biggest obstacles in combating high suicide rates.

During an injury-blighted career, he recalls one hamstring strain he suffered at Charlton which tipped him over the edge.

McKenzie describes the pain he felt as “someone taking my heart out of my chest” and remembers, for the first time, thinking: “I actually want to kill myself.”

“I went back into the treatment room, I sat on the bed and I burst into tears and cried,” he recalls.

“There were a lot of people walking past and this is why I do what I do now, because there’s an understanding factor that comes into it.

“I don’t think people really speak to someone they might see crying, especially a man.”

McKenzie eventually retired from football in 2013 after an 18-year career and subsequently reinvented himself as a successful professional boxer.

His dad Clinton, who he describes as his “best friend,” was a British and European champion and reached the 1976 Olympic final, losing to Sugar Ray Leonard, considered by many one of the greatest boxers of all time.

“I think he’s always had boxing in his blood,” he says of his son.

Of his 11 professional fights, McKenzie won eight, including a bout against Ivan Stupalo for the International Masters super middleweight title.

“With boxing, what it provided at a time in my life was extraordinary,” he says.

“I think my advice to anyone who has lost themselves in life, is to reinvent yourself. And that’s exactly what I did.

“Men have this pride factor that comes into play, and that’s what I’m trying to change.”

McKenzie is starring in a documentary called “Ten Count,” which looks at the mental health issues involved in the downward spiral of a sports star.

“I know that it’s going to open up a lot of doors for men to be able to come forward and have the confidence to be able to speak.

“If you can make someone feel better through generosity or life experiences, I think that’s pretty inspiring. i

“It’s a nice inner peace that you hold through your own journey because you know that, through what you’ve spoken about, is going to help another person, if not save a life.”

Football Isn't a Matter of Life and Death | Tackling Suicide 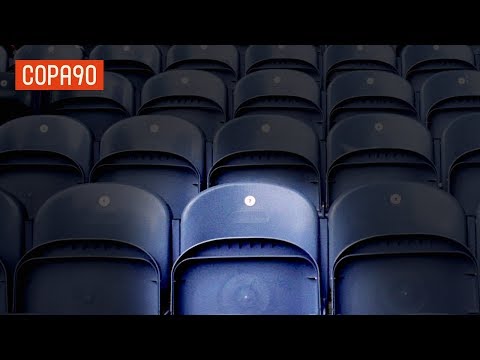 Copa90 has been working with mental health charity Maytree to try and help tackle suicide in young men.

You can learn more about Maytree’s work or donate here.