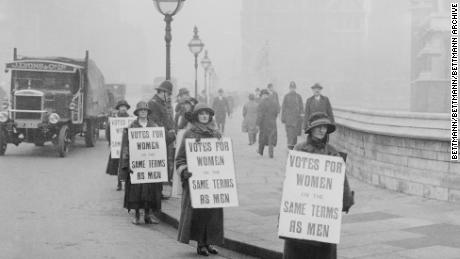 An undated photo shows a group of suffragists demonstrating outside the House of Commons in London.

100 years ago (some) British women got the vote

(CNN)Tuesday marks 100 years since some British women were first guaranteed the right to vote. The Representation of the People Act was adopted in February 1918, eventually paving the way for universal women's suffrage in the country.

Here's a look at how all women in the UK were eventually granted the vote and how it compares with the rest of the world.

But the landmark act only granted a sliver of the UK's female population the right to cast a ballot.
Under the 1918 Representation of the People Act, women over the age of 30 who either owned land themselves or were married to men with property were given the right to vote.
Read More
The same act also dropped the voting age for men from 30 to 21.
For the next decade, the number of women's suffrage campaigners grew as they demonstrated for equal voting rights under two main factions.
Suffragettes organized under the National Federation of Women Workers at a demonstration in London in 1911.
The Suffragists, a predominantly middle-class group of women, campaigned under traditional, non-violent forms of dissent, using peaceful tactics and demonstrations to collectivize under the law. The more militant Suffragettes took another approach to their campaign, executing hunger strikes, and carrying out arson and firebomb attacks to galvanize support.
In 1928, under the Equal Franchise Act, women in the UK were granted equal voting rights, increasing the number of eligible female voters from 8 million to 15 million.

How does the UK stack up against the rest of the world?

Like the UK, Austria and Germany also first gave way to women's suffrage in 1918.
New Zealand was the first country in the world to secure women's voting rights under law in 1893. In 1902, some Australian women got the right to vote -- but the law excluded indigenous women from casting their ballots until 1967.
In Europe, Finland became the first European country to introduce women's suffrage in 1906. Women in Switzerland were the last in Europe -- excluded from their voting rights until 1971.
In 1929, Ecuador became the first South American country to grant women's universal suffrage. It was an optional right for women to exercise until 1967, when it became compulsory.
Mongolia became the first country in Asia to grant women the vote in 1924. Following independence in 1947, Pakistan adopted universal suffrage for legislative elections -- with women granted the right to vote in national elections in 1956. Indian women were granted universal suffrage in 1950.
Women's suffrage in Gulf States have lagged behind the rest of the world, with Oman the first to loosen the law in 1994, followed by Qatar in 1999. Bahrain changed their laws in 2002, followed by Kuwait in 2005.
In the United Arab Emirates, the right to vote is limited for both women and men, but in 2006, around 6,000 citizens -- including women -- were able to cast their ballots.
Saudi Arabia women voted in municipal elections in 2015, marking the first time they were allowed to cast ballots -- and run for office -- in the Kingdom.

After 100 years of female suffrage in the UK, women are still under-represented in Parliament

Although some women in the UK have been casting their ballots for 100 years, female politicians remain a minority in elected positions of power.
There are more women members of parliament than ever before, but they still make up only 32% of the total 650 members of Parliament. In 2017, 208 female lawmakers were elected to the House of Commons in the General Election -- the most seats that women have held in the country's history.
<div class="zn-body__paragraph" data-paragraph-id="paragraph_D7BDEEF5-7F2C-D969-B4AD-66A88A970062"