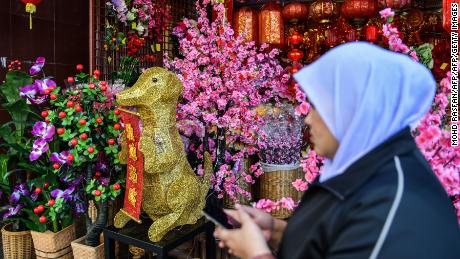 A Malaysian Muslim woman (R) walks past a golden canine statue (C) ahead of the Lunar New Year celebrations in Kuala Lumpur's Chinatown on January 26, 2018. As the Year of the Dog approaches, some shops run by ethnic Chinese in Malaysia are keeping canine models inside instead of displaying them prominently to avoid causing offence in the Muslim-majority country. / AFP PHOTO / MOHD RASFAN (Photo credit should read MOHD RASFAN/AFP/Getty Images)

Year of the Dog exposes growth of Islamic conservatism in Malaysia

Kuala Lumpur, Malaysia (CNN)With the Lunar New Year round the corner, Chinese around the world are preparing to welcome the Year of the Dog.

But in Malaysia, where people of ethnic Chinese descent make up almost a quarter of the population, images of the dog have been omitted from Lunar New Year decorations and merchandise for fear of offending the country's Muslim majority.
The omission has raised hackles in the Chinese community and caused concern among Malaysians of all faiths, who see it as yet another symptom of the country's growing Islamic conservatism, driven by the government's flirtation with hardline Islamist policies and a cultural shift by religious students returning from the Middle East.
Sunway Pyramid, a busy shopping mall just outside the country's capital of Kuala Lumpur, is one of several major commercial hubs that has opted not to depict dogs, which are considered unclean by many Muslims, in its Lunar New Year decorations.

Read More
Sunway Pyramid decided not to display dogs because they wanted to be respectful to what they perceive as Muslim sensitivities, but it suffered for its decision.
A communications officer for the mall said her company has been the target of a backlash on social media for its decision not to display "contentious" cultural emblems, with calls for a boycott of its mall.
Ms Tan, a 40-year-old Malaysian-Chinese shopkeeper in the mall, who declined to give her full name, said: "This is a multiracial country, when they do something like that it shows disrespect to the Chinese race here."
"If this is the case they should just make this only an Islamic country, but we have Buddhists, Hindus and other... (religions) as well here," she added.
Several shops selling the customary red and gold new year decorations in Kuala Lumpur's Chinatown have kept those featuring dogs inside rather than on display out front.
Last month, Reuters reported that Pavillion Mall, a shopping mall in the heart of Kuala Lumpur which gets about 3 million monthly visitors, also chose not to depict dogs in its decorations, citing religious and cultural sensitivities as a factor in their decision.
Earlier this year, a hypermarket chain around the country was embroiled in controversy when it emerged that Lunar New Year t-shirts being sold there depicted 10 animals in the Chinese zodiac, but not the dog or the pig.

In Year of the Dog, Malaysian businesses play down dog decorations https://t.co/GoST5uZLGu

Multicultural Malaysia has seen an increasing intolerance towards things considered insulting to Islam, & Muslim leaders have previously been vocal against dogs. pic.twitter.com/yHDfnOdKGl

The 2018 Lunar New Year isn't the only time that animals considered taboo in Islam have caused public furor. There were outcries when Malaysia in 2016 ordered eateries and fast food chains such as Auntie Anne's and A&W to change the name of dishes such as 'Pretzel Dog' and 'Coney Dog' to 'Pretzel Sausage' and 'Beef Coney' or 'Chicken Coney'.
The reason? The country's Islamic department said 'dog' would confuse Muslims.
Malaysia's 30-million population is estimated to be 60% Malay Muslim, with prominent Chinese, Indian and other minorities.
Though Islam is Malaysia's official religion and the country has Sharia courts for civil cases for Muslims, it is constitutionally secular.

Maria Chin Abdullah, a prominent pro-democracy activist, says what's happening with the Lunar New Year decorations are "just small signs" of growing Islamic conservatism.
"The secularism in our system that we enjoyed seems to be disappearing."
As evidence, Chin pointed to the increasing frequency with which Malay women now wear the tudung, (headscarf), the Arabisation of Malay vocabulary -- for example the word "Eid" being used for the Islamic religious holiday instead of the Malay "Hari Raya Puasa", and books being banned for espousing moderate forms of Islam.
Other contentious recent issues include a beer festival in Kuala Lumpur that was canceled last year on security grounds, <a href="https://www.reuters.com/article/us-malaysia-religion