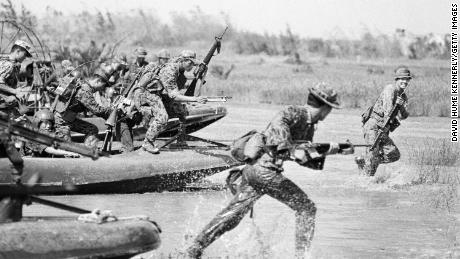 South Korean soldiers advance during an assault on a position near Nha Trang in 1972 in Vietnam. South Korea was the second-largest foreign force in the conflict, which stretched from 1954-1975.

(CNN)Tran Thi Duoc was 16 when the soldiers came to her village.

They wore camouflaged uniforms and helmets and carried long, black rifles. Behind them, in a neighboring hamlet to the northwest, she and other villagers could see smoke from burning houses rising into the bright, midday sky.
The soldiers, who were Asian but spoke a language the villagers could not understand, ordered them to leave their houses and gather around a well in the village's center.
Then the shooting started.
As Tran later told US military investigators, she fell to the ground and tried to play dead, but a soldier saw her and pulled her back up.
Read More
"I joined my two hands in front of my breast, knelt before him and begged for my life," she said. "But he shot at me."
The bullets broke her fingers and tore into her arms and upper body, but did not kill her. Tran passed out. When she woke up, she discovered her parents and two brothers dead, and her three-month-old sister wounded.
Tran Thi Duoc, then a 16-year-old resident of Phong Nhi village, testified to US investigators about the alleged massacre by South Korean troops. Original image altered for clarity.
In total, 69 people were killed in Phong Nhi and neighboring Phong Nhat that day in February 1968, according to a US investigation that was kept secret for decades.
It was one of many alleged Vietnam War atrocities committed against defenseless civilians that would come to be overshadowed by the My Lai massacre a month later.
Unlike My Lai, which became public the year after it happened, the Phong Nhi and Phong Nhat killings remained largely unknown until the 21st century.
They were also allegedly carried out not by US troops, but by South Korean soldiers, part of a pattern of brutal behavior documented in now declassified US government cables and reports, and the testimonies of survivors and veterans.
The revelations about South Korean atrocities during the Vietnam War, which began in the early 2000s, sparked a debate about the country's culpability for the US-led conflict. This reckoning, which jarred with South Korea's own history of abuse by foreign powers and mass killings, is still going on today and remains a deeply sensitive subject.

In September 1965, President Park Chung-hee, a former army general who had seized power in a coup four years earlier, ordered thousands of South Korean combat troops to pour into Vietnam.
They formed the bulk of of the Free World Military Assistance Forces, an unlikely grouping of troops from South Korea, Australia, New Zealand, the Philippines, Spain and Taiwan.
According to a 2016 report by the US School of Advanced Military Studies, "the ROK (Republic of Korea) Army played a crucial role in the US Army's operations ... and by 1972, outnumbered their American partners."
Around 320,000 South Korean soldiers would rotate through Vietnam during the war, with more than 50,000 in the country at the height of their deployment, according to the SAMS report. Despite this, South Korea's role in the conflict is little known in the West, where the Vietnam War is near universally depicted in popular culture as being fought by US troops, with other nations reduced to minor supporting roles.
<img class="media__image media__image--responsive" alt="South Korean soldiers seen with a group of captured Vietcong prisoners." dat