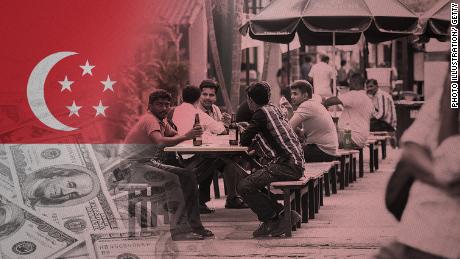 Singapore (CNN)It's a bustle of activity in the drop-in center. Men line up to sign their names in a book and claim tokens for a free meal, redeemable at cheap restaurants in Singapore's Little India district.

They're all migrants without jobs in the city-state; many are seeking help to reclaim unpaid wages. The drop-in center, run by migrant rights organization Transient Workers Count Too (TWC2), can see up to 500 men each night.
Singapore's constant construction boosts the economy, and relies on a large foreign labor force. As of June 2017, Singapore had about 296,700 migrant workers in the construction industry, from countries like Bangladesh, India, Myanmar and China, according to the Ministry of Manpower.
Working in a city without a minimum wage, they earn a fraction of the salaries of white collar employees who toil in offices the migrant workers construct. Despite the city state's reputation for technocratic efficiency, for some it's a huge struggle to get paid.

Read More
Sardar Md Insan Ali from Bangladesh hoped his earnings from Singapore's construction sector would translate to a better life for his parents, wife and young child.
He arrived in 2017, and was promised he would be paid S$1,600 (US$1,173) a month.
After his arrival, he said he discovered his wage would be just S$18 ($13) per day. His employer chose not to pay him in full for eight months.
"My boss would only lend us S$200 here, S$300 there [to get by]," Sardar said. The 31-year-old would keep a little money for himself and send the rest to Bangladesh.
Labourers work at a construction site in the financial district in Singapore on August 8, 2014.
This is a familiar tale to Tamera Fillinger, who helps to manage TWC2's Wednesday clinic that assists workers with injury and salary claims.
"What we see over and over again is that the guys will put up with the employer's assurances, for some number of months, that they will be paid the full amount," she said.
"Some guys go months without being paid at all, but most of the time they are shortchanged or underpaid."
"What really pushes them to claim is when the employer stops paying altogether or the guys give up, realizing the assurances are not going to come to fruition."
Singapore's Ministry of Manpower said it had received 9,000 salary-related claims involving about 4,500 employers in 2016. These figures include both local and migrant workers.
According to a response to a parliamentary question by Lim Swee Say, Singapore's Minister for Manpower, 95% of those cases were resolved either through mediation or in the Labor Court. He added that 158 employers had been prosecuted and convicted over the last three years for not paying wages.
However, Jevon Ng, a social work executive at the Humanitarian Organisation for Migration Economics (HOME), said that number is low, because the ministry favors "a conciliatory approach over a punitive one in resolving salary claims" to maintain its business-friendly reputation.
"It has been reluctant to prosecute employers even when there is evidence that employers deliberately undermine the system and cheat workers of their salaries. This gives employers the leeway t