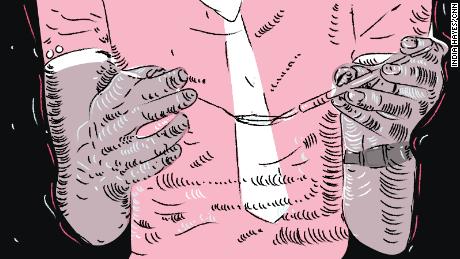 Inside the secret lives of functioning heroin addicts

(CNN)They're not slumped over in alleyways with used needles by their sides. Their dignity, at least from outside appearances, remains intact. They haven't lost everything while chasing an insatiable high.

They are functioning heroin addicts -- people who hold down jobs, pay the bills and fool their families.
For some, addiction is genetic; they're wired this way. For others, chronic pain and lack of legal opioids landed them here. Or experimentation got them hooked and changed everything.
What addicts have in common, according to experts, is a disease that has more to do with their brains than the substances they use. About 85% of people can take a pain pill, for example, and never crave it again.
This is a story about the others, those traveling the dangerous road of functional addiction. What works for them now, experts explain, can easily and lethally be derailed.
Read More
Hanging in the balance are people you may never imagine: peers, co-workers and neighbors. Loved ones, bosses and teachers. Respected members of your community who, for the benefit of everyone's understanding, want to be heard.
After CNN gave voice last fall to addicts on skid row, the sorts we think of when we picture "heroin addict," I set out to tell this overlooked part of the heroin story.
Being a functioning addict hinges on heroin use staying hush-hush, so we agreed to change the names of those willing to open up.

'All smiles and happiness at work'

Loving and successful parents, good schools, a great upbringing in the Midwest: Todd can't point to anything that drove him to drugs. He was a typical suburban high school student who dabbled in weed. Then, at 15, he popped a Percocet his mother left lying around while she was recovering from surgery.
"The feeling in my head was, 'I want to feel like this for the rest of my life,' " Todd says. "It was the perfect drug for me."
The 11 years since have been a dance with opioid addiction, even as he graduated from college and embarked on a successful career in corporate management. Now 26, he has gone stretches where he's been sober, but the pull is strong and keeps yanking him back.
He's done heroin for periods of time and says it's "fantastic," but shooting up isn't his style. His preference, assuming he can find them, is to buy more expensive opioids. For a long time, OxyContin was his drug of choice; now he prefers Opana and, if he can't get that, Subutex.
<div class="zn-body__paragraph" dat