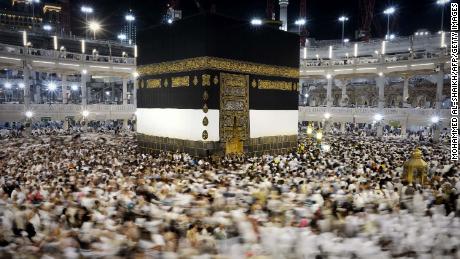 'I never told anyone': 5 women's stories of sexual abuse at the Hajj

Editor's Note: CNN is committed to covering gender inequality wherever it occurs in the world. This story is part of As Equals, a year-long series.

Hundreds of thousands of Muslim women descend on Mecca in Saudi Arabia each year to take part in the Hajj, but in recent weeks some female worshipers have told CNN they experienced incidents of sexual abuse or harassment while participating in the five-day pilgrimage.
Five women told CNN they were compelled to share their stories after a Pakistani woman's account of being sexually abused at the Hajj went viral on Facebook last month. That post (since deleted) prompted an outpouring of similar stories from female pilgrims on social media.
The Hajj is a spiritual pinnacle for Muslims around the world, with up to three million pilgrims traveling to Mecca to participate each year. In 2016, almost 42% of all worshipers were women. Every Muslim who is physically and financially able to, is required to do the pilgrimage once in their lifetime. As one of the largest annual pilgrimages in the world, crowd control poses a major challenge.
Most of the incidents of sexual abuse and harassment reported to CNN happened during the tawaf ritual, a counter-clockwise procession around the Kaaba shrine. Only some of the women who shared their stories with CNN reported the incidents to police in Saudi Arabia but those who did said their complaints were ignored.
Read More
Responding to CNN, an unnamed Saudi official familiar with Hajj affairs said the Kingdom does not tolerate this kind of behavior anywhere, especially at holy sites and added that allegations made by the women were being taken very seriously by authorities.
"Anyone found guilty of committing these acts faces serious consequences including imprisonment and caning," the Saudi official said. "By Royal Order, female police officers and investigators are now being added to the police force and security services including the Public Prosecution Department, so there will be a greater female security and police presence within the country and at the Holy sites to handle any issues that may arise."
Saudi Arabia already issued a royal decree in September 2017 to outlaw sexual harassment. A new law is currently being drafted.
Below are the five women's stories. They have been edited for clarity and length. Some women requested to remain anonymous because they fear a backlash within their communities.

Asra Nadeem, a Pakistani woman living in the US

I was 21 years old in 2006 when I did the Hajj for the first time.
First, I got stuck in the 2006 stampede during the Stoning of the Devil in Mina and that itself was very traumatic. It was horrible.
But a few days later I went back to Mecca to perform Umrah (a shorter form of the Hajj pilgrimage that can be performed at any time of the year). During that time, I was on my own, doing tawaf around the Kaaba.
The closer you get to the Kaaba, the more crowded it gets. Everybody wants to touch the Kaaba. I wanted to get closer to touch it, and in the last circle the crowd was moving really slowly.
I was next to the Kaaba and somebody grabbed my bum. I thought it was just the crowd; everyone was pushing. But then, when I moved up, somebody grabbed my boobs.
I turned my head and I saw this guy just smirking at me. I couldn't do anything, and he was still holding my breast. So, I yelled at him, and then people started pushing me forward, shouting "yalla" ("hurry up").
I reported the incident to the first two guards that I saw but both of them did not speak English and told me to move along.
I've met a few people who messaged me the same experience but in 2006 you didn't want to talk about it, before Facebook or anything.
Hajj is a spiritual experience -- you're in a different state of mind. You're praying for things, it's very Zen-like. Your first instinct is that it cannot possibly be happening, but it's there, in your face
I didn't go back to do Hajj. It was very traumatic, first the stampede and then the harassment.

I had never been sexually assaulted before I went to Mecca, in 2007 when I was 32. The first time it happened I was heading into the Grand Mosque to perform tawaf. A man was heading out, towards the courtyard, and as he approached me he outstretched his arm and grabbed my breast. It wasn't a clumsy brush. It was a grab. It was forceful and it hurt. He didn't let go immediately. He squeezed and was looking at me the whole time.
The second time I was in the courtyard of the Grand Mosque and I felt something pressing into my lower spine. It was crowded and lots of people were bumping into each other. But the pressing continued. I turned around and saw it was a man and realized he was pressing his erection into me. He was pushing against me so hard he was almost driving me forward. He too was looking at me and holding my gaze. I ran off and found a policeman and told him (in English) what had happened. He shooed me away. He had no interest in listening to me. I even pointed out the man in the crowd and the policeman still ignored me.