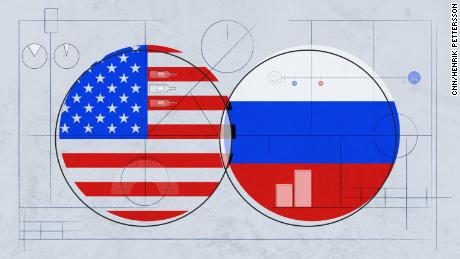 Russia vs. US: Where is life better?

(CNN)Russian President Vladimir Putin is expected to win the March 18 election by a wide margin, but that doesn't mean Russians are happy with the way things are.

Restrictions on political freedoms have prevented any real opposition from running against Putin, and years of economic troubles have hit everyday Russians hard.
But is life in the United States any better? Here's how the two countries compare...

Americans are significantly happier than Russians, according to the UN's World Happiness Report 2018. Looking at indicators such as income, life expectancy, freedom to make decisions and social support, the US ranked 18th of 156 countries, while Russia was 59th.
Read More
But that gap is closing. Another index in the report measuring changes in happiness levels in 141 countries showed that Russians became happier from the period 2008-10 to 2015-17.
The US, however, was among 72 countries that became less happy in that time. This loss of happiness was mostly due to non-income factors, including less social support and a reduced sense of personal freedoms, the report suggests.

Prices are generally much lower in Russia than in the US, but Russia wages are lower too. When purchasing power parity -- a measure of affordability -- is taken into account, Americans can buy more with their bucks than Russians can with their rubles.
Renting a home and lifestyle expenses, like going out for dinner or buying a bottle of wine, are much more affordable for Americans. Of course, there are some things, such as catching a cab, that are cheaper for Russians.

The gender gap in the US isn't that different to Russia's when it comes to the number of women in the workforce and education levels. But a World Economic Forum study of gender equality around the world ranked the US well above Russia for one main reason -- political empowerment.
American women play a greater role in governance overall than women in Russia, although Russia has more women in ministerial positions. Neither country has had a female head of state in modern history.
Russia has no laws specifically addressing domestic violence, and in February 2017, the country introduced legislation dubbed the "slapping law," which actually decriminalized many forms of violence in the home.

Paid vacation is enshrined in law in Russia, and everyone in the country is entitled to at least 14 paid national holidays as well. If these holidays fall on a day like Tuesday, Russians will often get the Monday off as a "bridge" day, as well.
The US is the only developed nation in the world that doesn't guarantee paid time off work. Americans in salaried professions, however, generally expect employers to offer paid vacation time and public holidays as well.
But a lot of Russians don't take the leave they're given -- many say they can't afford to go away. It's also because Russians often rely on financial extras, like overtime, so while they may get their wages to take time off, they give up other benefits if they do.