Kanye West vs. Van Lathan: What to know about the rapper’s critic

They also stirred discussion about the need for diversity

Van Lathan just became a champion of Kanye West critics and an example, for some, of the need for racial diversity in the workplace.

Lathan is the African-American TMZ employee who offered a powerful rebuttal after West, during an interview Tuesday on “TMZ Live,” said American slavery was a “choice.”

Kanye West just said 400 years of slavery was a choice

Kanye West just said 400 years of slavery was a choice

“Do you feel like I’m thinking free and feeling free,” West asked those in the newsroom.

“I actually don’t think you’re thinking anything,” Lathan said. “I think what you’re doing right now is actually the absence of thought.”

After validating West’s right to offer up an opinion, Lathan noted that there are “real-world, real-life consequence behind everything that you just said.”

“And while you are making music and being an artist and living the life that you’ve earned by being a genius, the rest of us in society have to deal with these threats to our lives,” Lathan said. “We have to deal with the marginalization that has come from the 400 years of slavery that you said, for our people, was a choice.”

“Frankly, I’m disappointed, I’m appalled and, brother, I am unbelievably hurt by the fact that you have morphed into something, to me, that’s not real,” Lathan concluded.

It was the mic drop heard round the social media world.

Comedian Chloe A. Hilliard tweeted: “This is why it’s important to have diversity on your staff. No one else was gonna speak up. And #Kanye wasn’t going to respect anyone else speaking to him like this. Thank You @VanLathan #TMZ.”

Tweets also poured in from fans, pundits and celebs, condemning West (who has been on a tear lately with controversial comments and tweets) and praising Lathan.

There is fact & real world, real life consequence behind everything you just said...the rest of us in society have to deal with these threats to our lives. We have to deal with the marginalization...from the 400 years of slavery that u said for our people was a choice.@VanLathan

Y'all. @VanLathan was sitting at his desk, minding his own damn business. Little did he know that he would be called to give the testimony of his life. And if Kanye hears ANYONE through this, it will be Van, a true fan who spoke from the heart with much to lose. Salute. pic.twitter.com/fOlLsQVOwR

Here’s what else you should know about Lathan:

TMZ isn’t the only place you can catch him

In it, he “serves up a weekly dose of truth, sonically force feeding listeners the red pill, and NEVER apologizing. News, politics, and pop-culture are all on the menu, with reality so sizzling it’ll fry your echo chamber.”

The show’s title references the movie, “The Matrix,” in which “taking the red pill” means waking up to the brutal reality of life.

He had more to say about Kanye

Lathan later Tuesday released an “emergency” episode of his podcast focusing on West, whom he called “someone I’ve lost all respect for.” 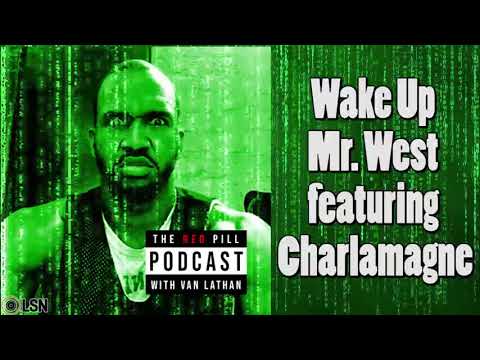 “One thing that bothers me particularly about where we are as a society is sort of the reverence that we have for celebrities outside of the scope of what they do,” Lathan said.

“But I would be a hypocrite if I didn’t say I was personally injured or personally disturbed by what Kanye West has been saying as far as his support for different people who I feel like are hatemongers,” he added.

Kanye West explains what exactly he likes about Trump

He’s been soaking in all the admiration

His Twitter following has grown, naturally, and he’s been retweeting and replying to some of the attention.

Thanks for the repost Icon. https://t.co/VizvByZdeO

Responding to a tweet from New York radio host Angie Martinez, Lathan wrote: “Thanks for the repost Icon.”