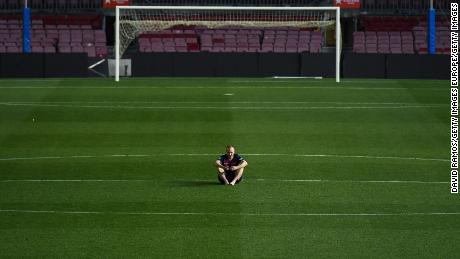 (CNN)When you've called a place home for over two decades, it can be hard to say goodbye.

Just ask Andres Iniesta, 34, who played the last of his 674 Barcelona matches Sunday, before remaining on the Camp Nou pitch long into the night.
The legendary midfielder was a picture of solitude as he sat barefoot in the area of the pitch he cast his spell, reflecting on his long and storied career one final time.
Iniesta first walked through the doors of the Spanish club's La Masia academy as a young boy, "crying rivers" as he left his parents behind.
In the 22 years since, he has won 32 trophies and the respect of even Barcelona's greatest rivals.
Read More
"It's been a pleasure and an honor to defend the badge," said Iniesta, as teammates lifted him high into the air and the stadium's 84,168 fans rose as one.
"I will miss you very much. I came here as a boy and I leave at 34 years of age a man. Thanks to everyone who asked me to stay, you will always be in my heart."

👏👏 They have lifted the league trophy and the Copa del Rey, now it's time for @andresiniesta8 #InfinitIniesta pic.twitter.com/VIaikXR3SH

Barcelona manager Ernesto Valverde called Iniesta an "unrepeatable, historical player," insisting his legacy would live on "long into the future."
"We wanted to compete and win but today was Andrés's day and the crowd made it special," said Valverde, after a Philippe Coutinho goal gave his team a 1-0 win over Real Sociedad in La Liga's final fixture.
Supporters saluted the departing midfielder with the message "Infinit Iniesta" ahead of kickoff.