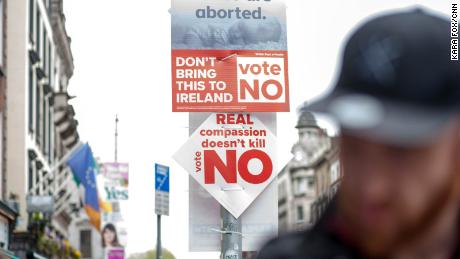 Campaign signs from the No campaign are seen on a Dublin street.

Dublin (CNN)Emily Faulkner is in central Dublin, handing out leaflets featuring fetuses in various stages of development, when she's pelted by an egg.

Covered in yolk, she turns to her fiancé, Nathan Berning, who has a GoPro video camera mounted on his chest.
"Did you get that on tape? Is it on, babe? Turn it on," she says.
As Faulkner wipes the mess from her face, a fellow anti-abortion campaigner approaches her, saying she'll be calling the police to have a look.
"Ok," Faulkner says with a smile. "I'm excited."
Read More
With just days until Ireland votes in a referendum on whether to repeal the Eighth Amendment to the constitution -- which places the right to life of an unborn child on equal footing with that of the mother -- campaigners have become increasingly confrontational in their tactics.
If a majority vote Yes on Friday, Ireland is expected to enact legislation that will allow for terminations up to 12 weeks into a pregnancy. A No vote would keep the country's abortion laws -- some of the most restrictive in the developed world -- in place.
But not all of those targeting voters with leaflets, placards and social media posts are Irish.
Emily Faulkner canvassing on Dublin's Dame street on May 14.
Faulkner, 23, and Berning, 25, are founders of the Colorado-based anti-abortion group Let Them Live. They've travelled to Ireland for the month leading up to the historic poll to "sway the voters to vote pro-life and hopefully keep Ireland pro-life."
"Basically it's a Roe v. Wade, but Irish style," Faulkner told a group of American students she was attempting to recruit for the journey, referring to the landmark 1970s court case that made it legal for women across the United States to have abortions.
When the couple (both associated with the US-based conservative nonprofit The Leadership Institute) launched a $10,000 crowdfunding campaign to finance the trip, they had written they'd be volunteering with Ireland's Pro Life Campaign. But after they experienced an "unexpected" backlash from Irish pro-repeal groups, who said they weren't welcome and threatened to report them to immigration, they changed that description, removing any mention of joining the campaign in an official capacity.
American anti-abortion campaigners (from left) Benyam Capel, Nathan Berning, Emily Faulkner, Chase Howell and Nicole Hocott in Dublin last week.
"We were deathly afraid we were going to get turned away at the gate," says Berning, and "wanting to make sure that people didn't feel threatened by us coming."
Groups dedicated to repealing the Eighth Amendment described the couple's tactics as deceptive.
Faulkner said she and Berning arrived at Dublin airport in early May and told immigration officers they "had no specific plans for the trip other than documenting" the campaign. Once they were let through the airport gates, the pair began to mobilize, designing canvassing materials they described as "information outreach" that another member would carry to Ireland from the US.
<div class="zn-body__paragraph" data-paragraph-id="paragraph_B00