Use of federal lands for illegal pot a growing concern, California officials say

By Madison Park, CNN
Published 6:59 AM EDT, Wed May 30, 2018
Link Copied!
Ad Feedback
Video Ad Feedback
Marijuana in America
KVVU
Now playing
00:59
Pot yoga: Highly relaxing and then some
Jonathan Reyes/CNN
Now playing
01:39
Your brain on marijuana
CNN
Now playing
01:22
Your brain on weed
An Israeli agricultural engineer inspects marijuana plants at the BOL (Breath Of Life) Pharma greenhouse in the country's second-largest medical cannabis plantation, near Kfar Pines in northern Israel, on March 9, 2016. The recreational use of cannabis is illegal in the Jewish state, but for the past 10 years its therapeutic use has not only been permitted but also encouraged. Last year, doctors prescribed the herb to about 25,000 patients suffering from cancer, epilepsy, post-traumatic stress and degenerative diseases. The purpose is not to cure them but to alleviate their symptoms. Forbidden to export its cannabis plants, Israel is concentrating instead on marketing its agronomic, medical and technological expertise in the hope of becoming a world hub in the field. / AFP / JACK GUEZ (Photo credit should read JACK GUEZ/AFP/Getty Images)
JACK GUEZ/AFP/Getty Images
Now playing
02:28
Why weed is stuck in a legal limbo
John Lustig and his wife Anne learn about cannabis lotions
Jen Christensen, CNN
Now playing
02:36
Seniors get on board the Cannabus
GO WITH AFP STORY by Desiree Martin A picture taken on April 12, 2013 shows plants of marijuana at the plantation of the Sibaratas Med Can association in Mogan on the southwest coast of the island of Gran Canaria. The plants grow from cuttings for approximately two months and then blossom before being harvested, dried, stored in jars for a month and later processed to be consumed on site. Spanish law prohibits the possession of soft drugs like cannabis in public and its growth to be sold for profit is illegal. But the law does tolerate growing cannabis for personal use and its consumption in private. Dozens of private marijuana smoking clubs operate across Spain that take advantage of this legal loophole that serve cannabis users who do not want to get their drugs from the streets. AFP PHOTO / DESIREE MARTIN (Photo credit should read DESIREE MARTIN/AFP/Getty Images)
DESIREE MARTIN/AFP/Getty Images
Now playing
02:11
Will recreational marijuana soon be legal nationwide?
CNN
Now playing
02:35
The weed distributor fighting 'big marijuana'
nfl marijuana use goodell fitzgerald bts_00001009.jpg
NFL Network
Now playing
00:48
Goodell addresses NFL ban on marijuana use
CNN Illustration/Getty Images
Now playing
02:00
California pushing back on Sessions' pot memo
AG Sessions, Rosenstein, Gore Civil Rights Ceremony
CNN
Now playing
01:47
Sessions to rescind Obama-era marijuana policy
Jeff Sessions NAAG remarks medical marijuana_00004720.jpg
CNN
Now playing
01:12
Sessions: Marijuana won't fix opioid epidemic
california weed vs whiskey sidner pkg _00001109.jpg
CNN
Now playing
04:07
Will weed be bigger than whiskey?
CNN
Now playing
02:24
Designer marijuana boost THC potency
marijuana edibles high profits_00000130.jpg
Now playing
01:09
Is eating marijuana riskier than smoking it?
history medical marijuana orig nws_00003424.jpg
Now playing
01:56
The quick hit history of medical marijuana
CNN  —

The secret marijuana sites are organized, funded and operated by Mexican cartels, said US Attorney McGregor Scott. The issue is particularly stark in California, which has more than 16 million acres of national forest lands, including Yosemite, Kings Canyon and Lassen Volcanic National Park.

“This is not a bunch of people growing marijuana in the woods,” Scott said in a news conference Tuesday. “This is people who are using chemicals and causing manifest environmental damage to a crown jewel of the United States – our federal public lands.”

The illegal growers divert the water supply, use toxic chemicals banned in the US and clear native plants and trees, in order to grow marijuana plants on what were pristine federal lands.

The issue of illegal marijuana farms on public lands has persisted in California for years, but Maj. Gen. David Baldwin of the California National Guard said they had seen a “tremendous uptick and increase in the amount of environmental damage and degradation that’s done by the growers, that have become bolder and bolder to take the public lands.” 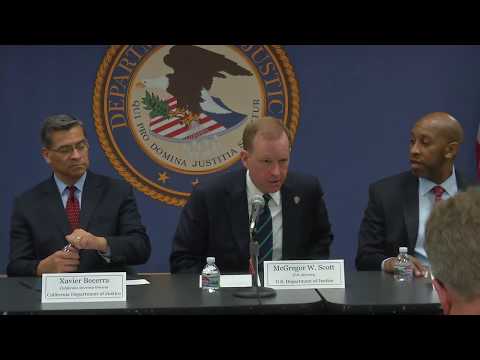 One of the major concerns is the widespread use of toxic and illegal pesticides, which pose dangers to the environment, wildlife, water supply and human health.

One of the pesticides detected at the illegal sites is carbofuran, which is banned in the US on all crops grown for human consumption. The toxic pesticide can seep into soil and streams, killing plants, wildlife including threatened species, and affecting humans who hunt and consume the animals.

Tests found that 78% of the illegal marijuana grow sites had signs of carbofuran.

Federal, state and local officials pledged to work together on this issue with $2.5 million of funding from the US government. “Our national parks and forests are priceless treasures … but these assets are being destroyed by criminal organizations that cultivate millions of marijuana plants on these lands each year for profit,” Scott said.

The US Forest Service estimated that about 1.4 million illegal marijuana plants were found in California last year. Many of these marijuana sites are located in rural counties where there are vast stretches of US forest land.

The growers also tend to be armed, which could be dangerous for visitors to public lands. Some of the growers claim to be affiliated with Mexican drug cartels such as the Sinaloa cartel and Jalisco Nueva Generación, said Bill Ruzzamenti, director of the Central Valley California High Intensity Drug Trafficking Areas program.

This photo provided by the US Attorney's Office shows trash found at an illegal marijuana site near Hayfork, California.
Lauren Horwood/AP

They leave behind plastic pipes, irrigation lines, tools, human waste and other garbage in what had been undisturbed habitats, according to the US Attorney’s Office for the Eastern District of California, which shared a photo from one of the sites.

“In addition to the poison and waste, the cultivators divert water to the marijuana plants, drying up streams and reservoirs used for plants, animals and humans,” it stated.