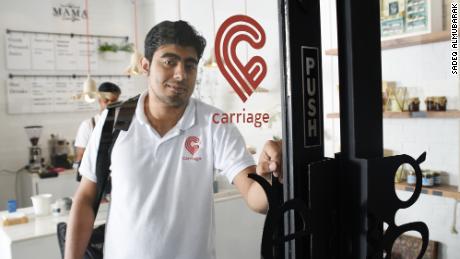 Unsatisfied with what he found, he convened with his brother, Musab, school friend, Khaled Al-Qabandi and Musab's US-based classmate from Stanford University, Jonathan Lau, to find a solution.
What the quartet came up with was Carriage.
The online ordering and delivery platform has since transformed the food delivery game in Kuwait, spread to neighboring countries and provided inspiration to a new generation of Kuwaiti tech entrepreneurs.
Carriage was snapped up by German online food ordering giant, Delivery Hero, for a reported $100 million in May 2017 -- a sizable sum for a company that was just 18 months.
Read More
Similar in concept to British online delivery company Deliveroo, which operates in urban areas in Europe and Asia, Carriage's founders say their main challenge was finding a way to cater for the sprawling suburbs prevalent in Kuwait and other Gulf cities without compromising on the quality of food delivered.
A non-disclosure agreement prevents the founders from confirming Carriage's sale price, but all admit to being amazed at how things panned out.
"It was very surreal for us," Abdullah says, reflecting on the "20-hour days" the founders racked up to establish the company, develop its applications and generally grow at a "million miles per hour."
"We didn't expect (to be bought out) that fast or that soon," he adds.
Read: What are best foods in Middle East?
Read: Kuwait's blooming nature reserve
Read: Kuwaitis face fast-food battle

Carriage is one of the more notable success stories from Kuwait's nascent but growing startup scene. It is also a potent example of the type of businesses the country's leaders are trying hard to foster.
Like many oil-rich nations in the Persian Gulf region, Kuwait has its sights set on creating more innovative private sector firms as part of sweeping diversification plans to transform the country's economy.
As of 2017, close to 80% of Kuwaiti nationals were employed in a public sector largely funded by oil revenues, according to a report by the Tri International Consulting Group.
But with oil resources finite and future prices uncertain, the need for Kuwait to prepare for the future is clear.
A range of government-backed programs, such as the National Fund for SME Development, have been created to help support new startups. Accelerators, incubators and co-working spaces, meanwhile, have been formed with the aim of inspiring the country's youth and turning Kuwait into a nation of tech-savvy innovators.
<div class="zn-body__paragraph" data-paragraph-id="paragraph_236D50FC-143