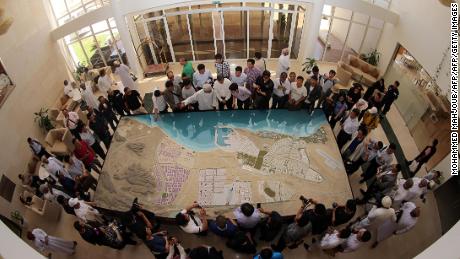 Chinese investors look at a scale model of a dry dock in Duqm in 2016.

Can Duqm become the Arab world's next 'great city?'

(CNN)The town of Duqm was once a sleepy outpost on Oman's central eastern seaboard. Located roughly 330 miles south of the nation's capital, Muscat, it has been home to fishermen and their families for generations.

But things are changing fast.
"The town is really growing a lot ... especially in the last year," says Vijay Handa, cluster general manager of the City Hotel Duqm, one of three new hotel chains catering to an influx of businesspeople.
"In the next four or five years, it's going to see even more people coming, with more building and more opportunity," he adds.
Fishermen head out into the waters around the town of Duqm in Oman.
Duqm is earmarked as the site of a vast new container port, refinery and industrial zone that, it is hoped, will help move the country away from dependence on oil revenues.
Read More
A new international airport, tourist resort, fishing harbor and residential zone for a potential 111,000 people are also key components of the Duqm masterplan, which was initiated in 2011.
Population statistics for the town are hard to come by. But Oman's National Center for Statistics and Information reports that the population of the sparsely populated Wilayat ad Duqm province, which includes the town, doubled from around 6,000, in 2011, to just under 12,000, in 2017.
According to Stephen Thomas, CEO of Omani facilities management firm Renaissance Services -- which recently opened a $197 million housing facility in the town capable of accommodating 16,900 workers -- Duqm will become a "great city."
"Already, you can see the momentum coming," he says. "You can see the blueprint for this city."
A mosque at the Renaissance Services facility in Duqm, Oman.
South Korea's Daewoo Shipbuilding and Marine Engineering has been operating a dry dock, where ships and tankers can be repaired in Duqm since 2012. In a nearby area earmarked to become an industrial zone, Chinese consortium Oman Wanfang aims to invest $10.7 billion to develop a series of projects, including a power plant and SUV manufacturing plant. Ground was also broken on an oil refinery jointly financed by Oman and Kuwait in April this year.
A spokesperson for the Duqm Special Economic Zone Authority (SEZAD) told CNN that 230 companies had invested in Duqm since 2012 with thousands of new jobs created.
Read: Nine reasons to visit Oman
Read: How southern Oman doubled for Red Planet
Read: Mirrors in Oman desert turn solar energy into steam

Build it and they will Duqm