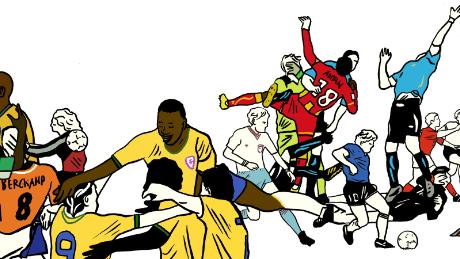 From headbutts to the 'Hand of God': 11 moments that shook the World Cup

By Euan McKirdy, CNN
Illustrations by Gianluca Costantini, for CNN

Russia 2018 will be the 21st World Cup. The preceding 20 tournaments have thrown up a host of dramatic and controversial moments. CNN Sport picks out 11 of them that continue to be talked about to this day.

1966: Geoff Hurst's controversial goal -- did it cross the line?

The 1966 edition of the World Cup offered a helter-skelter final at Wembley, the spiritual home of football. West Germany opened the scoring before being pinned back by England, who then went on to take the advantage. Germany came back bravely to equalize late, making the score 2-2 and sending the game into extra time. And then came the controversy.
Running onto a cross from Alan Ball, England's Geoff Hurst controlled the ball and shot high, beating the keeper but hitting the crossbar. The ball bounced straight down, making it virtually impossible to tell if it had crossed the line. Hands from both sides shot up and a tense few minutes ensued, with the Soviet linesman, Tofik Bakhramov of Azerbaijan, first denying the goal and then, following consultation with the referee, allowing it.
After that, deflated and on tired legs, the West Germans allowed Hurst the run of the pitch as jubilant England supporters made their way over the advertising hoardings. British commentator Kenneth Wolstenholme summed it up when he uttered the famous line: "Some people are on the pitch. They think it's all over," as the unlikely hat-trick hero Hurst hammered home a fourth for England. "It is now!" Wolstenholme concluded.
Read More
The fourth goal put the match beyond West Germany for good, sealing the Jules Rimet trophy for England, on home soil for the first and only time.