Idris Mukhtar, for CNN
Updated 2:50 PM EDT, Fri June 8, 2018
Link Copied!
Ad Feedback
Every competitor at the 2016 Olympics will have undergone a personal journey to reach Rio. But for some athletes, notably a number of refugee competitors, the path has been truly life changing ...
YASUYOSHI CHIBA/AFP/AFP/Getty Images
Paul Amotun Lokoro: South Sudan, 100m —
Paul Amotun Lokoro fled war in his home country of South Sudan. Years later, the 24-year-old is aiming to not just compete, but thrive at the Olympic Games."I want to win a gold," he says. "If I win the race, I will be famous!"
Claire Thomas/Claire Thomas
Rose Nathike Lokonyen: South Sudan, 800m —
Fourteen years after leaving South Sudan for the Kakuma refugee camp in Kenya, Rose Nathike Lokonyen is set to line up alongside some of the world's finest middle distance runners at Rio 2016.
Claire Thomas/ioc
Yiech Pur Biel: South Sudan, 800m —
Pur Biel also fled the Sudanese civil war, arriving at the Kakuma camp in 2005. The 21-year-old cites the prospect of Rio 2016 as "a great moment in my life and a story to my children and grandchildren."
Claire Thomas/Claire Thomas
Rami Anis: Syria, Swimming —
Six years ago, Rami Anis was swimming for Syria at the Asian Games in China. But in 2011, he fled his home of Aleppo to escape bombing.
Leaving Syria, reaching Rio —
His new coach in Belgium believes Anis' place in the Rio 2016 Olympic refugee team is a form of "justice".
FRANCOIS XAVIER MARIT/AFP/AFP/Getty Images
Yusra Mardini: Swimming, Syria —
Joining Rami on the team is 18-year-old Yusra Mardini, another refugee from Syria who now trains in Germany.
Alexander Hassenstein/Getty Images Europe/Getty Images for IOC
Youngest refugee athlete —
Mardini's coach, Sven Spannekrebs (pictured left here), will be one of the backroom staff joining the refugee team for Rio.
Alexander Hassenstein/Getty Images Europe/Getty Images for IOC
Popole Misenga: Democratic Republic of Congo, Judo —
Congolese judo athlete Popole Misenga sought asylum in Brazil after the 2013 world championships in Rio. He will be on the official Olympic Refugee Team for the 2016 Games in the same city.
YASUYOSHI CHIBA/AFP/AFP/Getty Images
New life in Rio —
Misenga, 24, has married a Brazilian and has a young son since being granted asylum. He says Rio is a "magical place" to live.
YASUYOSHI CHIBA/AFP/AFP/Getty Images
Anjelina Nadai Lohalith: South Sudan, 1500m —
Anjelina Lohalith, 21, left her home country when she was just eight years old. While her family remain in South Sudan, she will now compete in Rio in the 1500m for the Refugee Olympic Team.
Claire Thomas/Claire Thomas
Yonas Kinde: Ethiopia, Marathon —
36-year-old Yonas Kinde left Ethiopia for Luxembourg in 2012 and immediately pursued his love for running. He soon becoming the best long distance runner in the tiny European country.
Claire Thomas/Claire Thomas
James Nyang Chiengjiek: South Sudan, 400m —
Just 13-years-old when he left his home, Chiengjiek managed to avoid the fate of South Sudan's child soldiers. He reached Kenya's Kakuma camp in 2002, quickly capitalizing on his athletic talents despite a lack of top class facilities.
Claire Thomas/Claire Thomas
Beyond the team —
Raheleh Asemani, formerly a taekwondo athlete for Iran, was on the shortlist for the Olympic Refugee Team -- but will now compete for Belgium in Rio having been granted citizenship.
ANTONY DICKSON/AFP/AFP/Getty Images
Woman behind the team —
For many years, Kenyan marathon runner Tegla Loroupe has been using athletics to work toward peace in Africa. Five of the Olympic Refugee Team are South Sudanese refugees from her foundation's training center, and she will be the team's chef de mission.
AFP/AFP/AFP/Getty Images
Nairobi, Kenya CNN  —

Kakuma is home to over 186 000 refugees from 14 countries and at the TEDx event former and current refugees will come together to share stories of resilience and inspiration with a global audience.

Five of the Olympic Refugee Team receive a rapturous reception at Kakuma camp in Kenya where they grew up.
UNHCR Kenya

Kakuma, a small town in North West, Kenya will receive more than 250 high profile guests at an event that will be streamed all over the world. 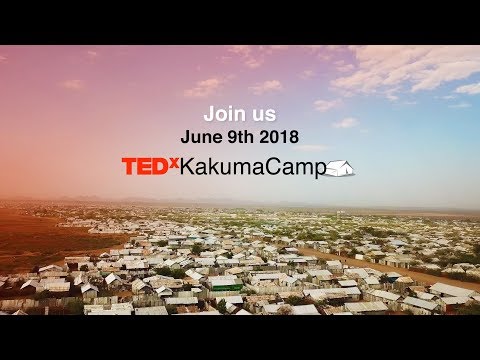 “We want the world to experience the phenomenal lives that the refugees are living’ said TEDx Kakuma Camp co-curator Melisa Flemming. “And we hope to change the narrative about refugees. It’s no longer a story of surviving but also thriving, there is so much happening here. There is so much talent.”

Pete Ouko, the first inmate to achieve a Diploma in Law from the University of London.
courtesy Nate Mook

Kakuma was set up in the remote Turkana region in 1992 to serve Sudanese refugees and is now home to those displaced by wars across Africa.

They mostly come from Somalia, Ethiopia and the Democratic Republic of the Congo, Eritrea, Uganda and Rwanda, according to the UNHCR.

Speakers at the event include Pur Biel, the 23-year-old Sudanese runner who arrived in the camp as a child and in 2016 participated in the first Refugee Olympic team, Mercy Aukot, a Sudanese social worker, Aminah Rwimo an international award-winning Congolese film-maker as well as the first hijabi model to grace fashion’s top runways, Halima Aden.

“We have refugee speakers who have never spoken on this kind of a global platform before,” said co-organizer Dana Hughes. “They’ve really started to believe in themselves. It’s been incredible to watch them gain confidence to come to the point where they can share their stories on a world-class stage.”

The speakers will explore the theme ‘Thrive,’ which is also about how refugees can change, not only their lives, but also the communities in which they live.

“We chose Kakuma because it is a representation of the old and the new,” said Flemming.

Saturday’s event will be held in a specially-erected tent venue in the forecourt of a Kakuma Camp school.

Thirty-eight tonnes of equipment had to be transported to the remote site by a convoy of trucks amid heavy flash floods , UNHCR said.