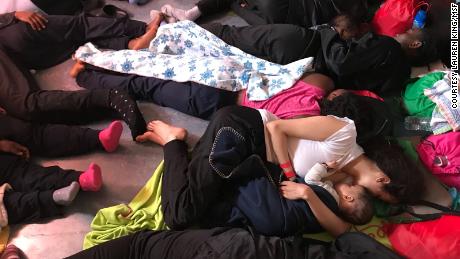 Women and children who were rescued from the Mediterranean are among those enduring seasickness as the rescue ship Aquarius makes its way to Spain.

What it's like on board the migrant ship to Spain

(CNN)Hundreds of migrants who were left to drift in the Mediterranean after Italy and Malta turned them away arrived in Spain on Sunday, ending, at least temporarily, a political crisis in Europe over policing the continent's southern border.

The rescued migrants and refugees were traveling on three ships: the Aquarius, operated by the charities SOS Méditerranée and Médecins Sans Frontières (MSF), an Italian naval ship and an Italian coastguard vessel.
Aquarius, which was originally carrying more than 600 rescued migrants, was left stranded in the Mediterranean for two days after Matteo Salvini, Italy's hardline interior minister and leader of the anti-immigration League party, refused to allow it to dock last Sunday. After Spain offered to take in the survivors, the ship started an 800-mile journey to the city of Valencia along with the two Italian ships, which were sent to ease the overcrowding.
Here's what the journey has been like for those on board:

Read More
Conditions on board the Aquarius worsened on Wednesday as poor weather and large waves caused dozens of people to suffer from seasickness.

🔴 UPDATE: Deteriorating weather: Waves up to 4m & winds up to 35 knots until tomorrow. Many people are seasick and receive treatment. Yet another unnecessary suffering for the 630 rescued people - after Libya, fearful hours on rubber boats and 4 days on 3 different boat decks. pic.twitter.com/81rvemMdwt

At least 80 people who were pulled out of the sea by rescuers over the weekend had to be treated by doctors as waves as much as four meters high and winds of 65 kilometers per hour buffeted the vessel, according to Doctors Without Borders (MSF), which operates the rescue ship alongside SOS Méditerranée.

🔴 UPDATE "My head is turning, I keep on vomiting, it's not easy", says a man on the #Aquarius. Last night all men still on the outside deck were transferred to the shelter for their safety. They received medical treatment for seasickness. Still a long and rocky way to #Valencia. pic.twitter.com/YiW8vhiG30

That included pregnant women and a mother "who was breastfeeding her baby while vomiting at the same time," Aloys Vimards, MSF project coordinator on board the Aquarius, told CNN.
"In the evening, we had to move the men sleeping on the outside deck to the shelter usually reserved (for) women and children, for safety reasons," SOS Méditerranée's Julie Mélichar told CNN.
Around 250 people were transferred from the Aquarius to the Italian Navy's Orione and a further 274 to the Coast Guard vessel Dattilo, SOS Méditerranée said.
Migrants are transferred from the Aquarius to Italian Coast Guard vessels in the Mediterranean Sea.

The bad weather forced the vessel to change course along the eastern coast of Sardinia in company with ships from the Italian Coast Guard and Navy.

🔴 UPDATE #Dattilo, the leading Italian coastguard ship of our convoy, decided to change route. #Aquarius will proceed along the eastern coast of #Sardinia to seek shelter from bad weather, otherwise unbearable for the rescued people, already exhausted, shocked and seasick. pic.twitter.com/c3D9p1mrjc