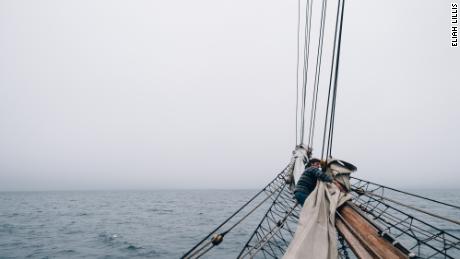 Wind howls violently against the ship as it crosses notoriously stormy waters -- tearing its sails in the process. But for the crew on board, as they cross the Barents Sea, this is the adventure of a lifetime.
The SV Linden in harbour outside of Bergen.
Aboard the Linden, 10 men battle sea sickness and work relentless shifts for 40 days in a determined effort to get the replica of a 1920s vessel from Denmark to the icy Norwegian island of Svalbard.
In Svalbard, home to 3,000 inhabitants -- polar bears outnumber people. Here, the landscape is rugged, remote, fragile and rich in untouched arctic wilderness. The seasons are relentless -- with long sunlit summer evenings and endless winter nights.
It's the Linden's maiden voyage after being revitalized, but for many on board this is more than just a journey. This is a mission to provide sustainable, eco-friendly expeditions in the high Arctic.
Read More
Not only that though, the voyage also aims to bring perspective to the lives of some of the Linden's young crew -- some of whom come from troubled backgrounds and have had run-ins with the law.
READ: Sailing around the world -- with three children
The sea has always been a huge part Linden captain Rasmus Jacobsen's life. For 30 years the Dane has worked on various sailing vessels and has dedicated his life to sustainability and environmentalism.
The Linden's captain, Rasmus Jacobsen has worked on various sailing vessles for 30 years.
"I was in the Caribbean when I saw these huge cruise liners coming into an island," he told CNN.
"They'd drop thousands of people at an island and they'd walk around and then they would leave the island and the footprint they would leave was a strange one because they were like ants and then they would disappear again."
From what Jacobsen saw, the island wasn't benefiting from the presence of tourists -- neither economically or environmentally.
Concerned about how this could be increasing the island's vulnerab