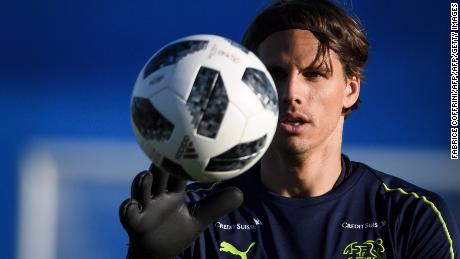 (CNN)There are few lonelier places than being the team's goalkeeper, especially when you're culpable for a mistake.

Having a method of escapism is crucial -- or in the case of Switzerland goalkeeper Yann Sommer having a number of methods of escape.
The 29-year-old is an accomplished chef and a fine photographer and composes his own songs in his spare time.
Rarely without his guitar, which has traveled with him to Russia, Sommer is as relaxed as you could expect with the pressure of the World Cup on his shoulders.
Sommer started taking singing lessons 18 months ago.
"I need some different activities away from football to help me switch off," Sommer told CNN Sport of his hobbies.
Read More
"Getting some distance from football is hard. There's so much pressure and when you go home you need to have something you can lose yourself in."
READ: What is VAR? The Video Assistant Referee explained
READ: The World Cup in numbers
For the past 18 months Sommer, who plays his club football with Borussia Moenchengladbach in Germany, has been taking singing lessons, and his repertoire consists of everything from Bruce Springsteen to reggae.
But one of Sommer's greatest loves is cooking, a love instilled in him by his mother and father at a young age.
Growing up in the family home in Switzerland, Sommer recalls learning from his parents in the kitchen, his father's famous paella dish or the ratatouille that he made on holiday in France.
Food was an integral part of his upbringing. It was little surprise, then, that he began to experiment after leaving his childhood home at 17 while chasing his dream to become a professional footballer.
Sommer grew up in a household that loved cooking. This porridge is part of his favorite breakfast.