The Netherlands introduces burqa ban in some public spaces

Face-veils are banned in schools, hospitals and government buildings, but not in public streets.

(CNN)The Netherlands on Tuesday became the latest European country to introduce a ban on face-covering veils in some public spaces.

The Dutch Upper House of Parliament passed a law banning face coverings, including burqas and niqabs, in public spaces such as schools, hospitals, public transport and government buildings.
However, it does not apply to public streets.
The new ban applies to all face-covering clothing, such as motor helmets and ski masks. But it does not include headscarves, as the face is still visible.
North region, Cameroon
Xinjiang, China
Lombardy, Italy
Diffa, Niger
Stavropol, Russia
Reus, Spain
Ticino, Switzerland
Belgium
Chad
France
Gabon
Republic of Congo
Azerbaijan Banned in schools
Kosovo Banned in schools
Malasyia Banned for public servants
Syria Banned for university students
Egypt
Netherlands
Tunisia
Germany 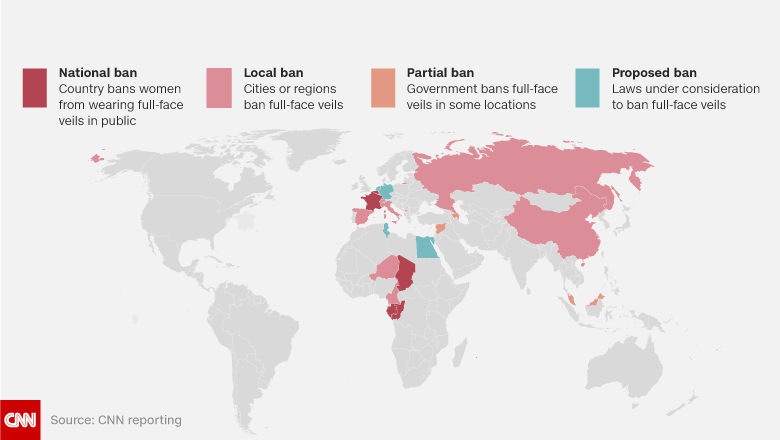 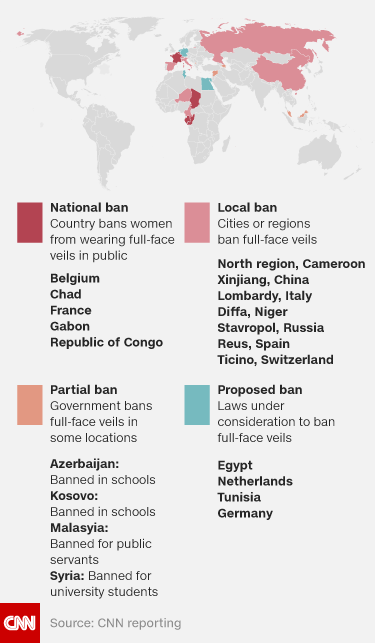 A niqab is a head and face covering, which has an opening so the wearer's eyes are visible. A burqa is similar, but also features a mesh covering over the eyes.
Read More
The new law was passed by 40 votes to 35, Upper House press officer Gert Riphagen told CNN.
He estimated there were between 200 and 400 burqa or niqab-wearing people in the Netherlands, out of a population of roughly 17 million.
Proponents of the law say it will improve safety by making people more easily identifiable. Far-right Freedom Party politician Geert Wilders, who has campaigned heavily for the ban, was quick to praise the decision.
"Finally, 13 years after a majority in the Dutch Parliament voted in favor of my motion to ban the burqa, it became law yesterday!" he said in a tweet, along with the hashtags #stopislam #deislamize #freedom

Finally, 13 years after a majority in the Dutch Parliament voted in favour of my motion to ban the burqa, it became law yesterday!#stopislam #deislamize #freedom https://t.co/N6R3qgV0mC

Critics, such as Annelies Moors, professor of Anthropology and Sociology at the University of Amsterdam, warn it could dissuade some women from entering public spaces, including schools.
The law follows similar bans in France, Germany, Belgium and Switzerland.
In 2016, Cannes, a city on the French Riviera famous for its annual film festival, even went as far as to temporarily ban religious swimwear -- including burkinis -- in the wake of recent terror attacks in the country.
The bans were later overturned in court.