At least 74 people have died in the worst wildfires to hit Greece in more than a decade, with some residents forced to flee into the sea to escape the advancing flames.

Residents told of horrifying scenes as flames engulfed a seaside village, where the only way out for some was to run for the water.

Boats were mobilized in a hurriedly-organized rescue operation as the flames took hold on Monday night. Reuters reported that 696 people were picked up from beaches and 19 from the sea. Rescuers also retrieved four bodies from the sea.

The Greek fire service confirmed that 25 people were found dead close to the seaside resort village of Mati as they tried to escape the fires.

At least 164 adults and 23 children have been injured in the blazes, which are burning in five main fronts in the Attica region, including one that is currently out of control near Mati. The area is popular with Greek tourists, in particular retirees and children who go to holiday camps there.

The fire service said many of those trying to escape were prevented from doing so by “increased wind intensity,” which helped fan the flames at a rapid pace.

People whose relatives are missing are still making calls to the fire service. In addition to about 500 firefighters battling the five major blazes, more than 100 members of the armed forces and fire brigade are searching for the missing, according to Greek National Fire Brigade spokeswoman Stavroula Malliri.

“There are no words to describe the feelings of all of us,” he said during a televised address Tuesday.

“The country is going through a tragedy,” Tsipras said, adding that the events were “unbearable for everyone.”

Another aerial view of the damage in Mati.
AFP/Hellenic Ministry of Defense/Getty Images

So far 715 people have been evacuated, mainly from the area of Mati, according to government spokesman Dimitris Tzanakopoulos.

“Attica is facing a very difficult night. The combination of intense winds and multiple parallel fronts has created an unprecedented extent and difficulty for firefighters,” Tzanakopoulos said in a briefing late Monday.

A woman searches her dog following a wildfire at the village of Mati, near Athens.
ANGELOS TZORTZINIS/AFP/Getty Images
A woman carries bottles of water as people stand amid the charred remains of burned-out cars in Mati east of Athens.
Thanassis Stavrakis/AP

The Attica region, which has a population of around 3.5 million people, is home to the capital Athens, the port of Piraeus and a number of suburban towns.

The fires forced the Prime Minster to fly back early from a state visit to Bosnia. He has urged citizens to forget their property and focus on survival.

“Everyone should keep their temper and take care to protect the most precious good that is human life,” he said.

“Property, all that has a material value, (can be) recreated. Human lives are the ones that cannot come back.”

Mati resident Nana Laganou told journalists that she had escaped by running into the sea, that the fire was “lightning fast” and that it was the first time she’d encountered something like this.

“I would have liked to see some (reaction) from the state, but we didn’t and we won’t and that makes me angry.”

Flames rise above the town of Rafina, near Athens.
ANGELOS TZORTZINIS/AFP/Getty Images

Another Mati resident, Kostas Laganos, said that he had also escaped the flames by diving into the ocean. “Thankfully the sea was there and we went into the sea, because the flames were chasing us all the way to the water, it burned our backs and we dove into the water,” he said.

“It reminded me of the eruption (of Vesuvius in 79 AD) at Pompeii, exactly that, and I said my God, we must run to save ourselves, and nothing else. Terrible.” 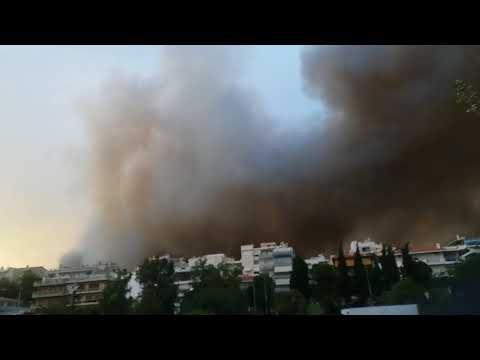 The nearby port town of Rafina has also been hit by the wildfires.

Anastasiya Pontikas, 32, told CNN that she returned from the supermarket on Monday to find her home surrounded by flames.

She quickly packed up some belongings and fled with her husband.

“The wind became stronger and black smoke was coming for us,” she said. “We could not breathe, panic started everywhere.”

“The fire stopped 100 meters from our house. When we came back home to see what happened, all the trees in our street were still on fire.”

So far Spain and Cyprus have offered assistance, and Greece has called on other fellow members of the European Union to help battle the blaze.

Various governments, including the US and the Netherlands, offered sympathy to the beleaguered region.

Much of Europe has been baking under a massive high-pressure ridge that is allowing tropical heat to climb all the way to the Arctic.

Temperatures above 32˚C (90˚F) extended to the northern reaches of Scandinavia, setting records in Sweden, Finland and Norway for stations above the Arctic Circle.

The result has been a string of unprecedented wildfires in Sweden that have prompted the country to request assistance from other nations such as Italy, with more resources to fight wildfires.