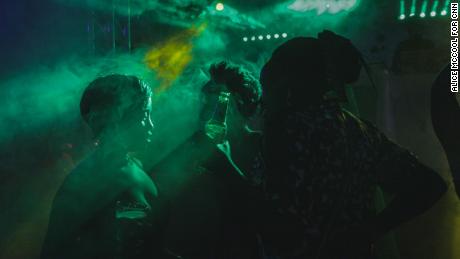 The crowd at Femme Famous, an event featuring female DJs at Bubble O-Leary's Pub in Kampala.

The feminist DJs in Uganda taking back the night

Kampala, Uganda — At a party in a private home in central Kampala, there was a moment early in the evening when the rose-lit room felt like a feminist utopia -- a rarity in Uganda.
Women drank hibiscus cocktails and danced happily with each other as a female DJ played a set.
"We're telling women that this space is for you, kind of turning the idea of ladies night on its head," Kampire Bahana (DJ Kampire), known for her all-African, bass heavy music, told CNN.
DJ Kampire playing a set at Pussy Party, an event for women she helps organize.
She's among a handful of female DJs working to create safe spaces for women and the LGBTQ+ community in Uganda, where violence against women continues to be rife. Half of women have experienced physical violence in the country, while 22% have experienced sexual violence, according to a 2018 report from the Uganda Bureau of Statistics.
Kampire, who organized the evening with other women, including Rachael Kungu (DJ Rachael), says their aim is to eliminate sexual harassment and demand accountability.
Read More
The country has a conservative outlook -- influenced by a mix of colonial-era laws, evangelical Christianity and traditional beliefs. In 2014, two controversial laws made international headlines. The Anti-Homosexuality Act created a surge in hate crime against LGBTQ+ people, and the Anti-Pornography Act, which included a "mini-skirt ban," led to police and vigilantes stripping women in the streets.
Driving through Kabalagala, the heart of Kampala's nightlife scene.
Activists say that these laws have created a fertile environment for crimes against women to be committed. Since 2017, the bodies of more than 20 women have been found dumped on roadsides in greater Kampala.
The government and police have been accused of being slow to respond to the spate of murders -- leading to a series of protests in June, including a women's march and procession carrying mock coffins to the country's parliament building.
In response to the murders, President Yoweri Museveni, Uganda's leader of more than 30 years, spoke out against gender-based violence and announced measures to deter attacks against women, including nationwide DNA collection.
A pink-tinted Kampire DJing at Pussy Party.
But local activists have accused Museveni of blaming female victims of night-time violence. Speaking about the murder of one woman in February, Museveni suggested that young people should avoid alcohol and drugs: "I will not allow anybody to interfere with the freedom of our young people: discos etc. ... but avoid alcohol, drugs and umalaya [sex work]. They are dangerous for you."
Industry veteran DJ Rachael disagrees.
Dubbed East Africa's first female DJ, Rachael has been filling dancefloors with big sounds for over 20 years.
"It's degrading for the government to blame women for being out at night," she told CNN, peering out beneath her signature baseball cap.
<div class="el__ima