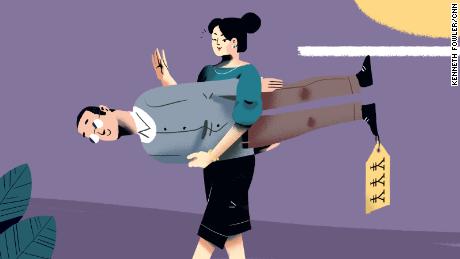 (CNN)"Unless you have interesting input coming into you all the time, you will psychologically die."

"You learn by seeing through other people's eyes."
"People live too seriously, and that kind of narrows down their vision."
These thoughts have not been generated by an algorithm or crowdsourced on Twitter. They are the accumulated wisdom of a middle-aged man in Japan.
A middle-aged man who's available for rent.
Read More
Wearing a shirt with a miniature panda bear print and smiling inscrutably, Ken Sasaki, 48, has a vibe that is anything but that of a disgruntled middle-aged Tokyo man.
Ken Sasaki -- and his violin -- is available to rent for about $9.
With gray hair, visible lines on his face and loss of youthful slimness, he is more like a free-spirited bohemian in a strange disguise.
Throughout an hourlong Skype interview, in which comments are tediously ferried back and forth through an interpreter, his energy and enthusiasm never flag, and his answers grow more expressive and thoughtful with each question.
It's all part of his job as a rented "ossan," the Japanese word for a middle-aged man.
He allows himself to be hired by anyone, for nearly any purpose -- not involving physical contact -- as long as they pay his hourly wage: a mere 1,000 yen (about US $9). And he loves it.