Supreme Court nominee Brett Kavanaugh in 2013 asserted that it’s a “traditional exercise” of presidential power to ignore laws the White House views as unconstitutional, as he defended the controversial practice of signing statements prevalent in George W. Bush’s White House.

The comments could put a renewed focus on Kavanaugh’s time serving as White House staff secretary, who had a role in coordinating Bush’s statements accompanying legislation he signed into law. Critics contend that the Bush White House abused the use of signing statements to ignore laws passed by Congress, though Bush and his allies said such statements were no different than the practices of other administrations.

Democrats have demanded full access to documents from Kavanaugh’s tenure as staff secretary from 2003-2006 as part of his Supreme Court vetting process, citing in part his role over the Bush signing statements. But Senate Judiciary Chairman Chuck Grassley, an Iowa Republican, has rejected those demands, saying they are irrelevant to his nomination and a Democratic attempt to drag out the vetting process, which already includes hundreds of thousands of pages from other aspects of his career.

In 2013, Kavanaugh was speaking at Case Western Reserve Law School in Ohio when he was asked about signing statements, with the questioner noting that critics say that presidents can issue them to ignore provisions in laws they don’t like.

In response, Kavanaugh said that injured parties can take their grievances to court if they believe the president is not following the law – and that Congress can push back as well.

The Courts and the Administrative State 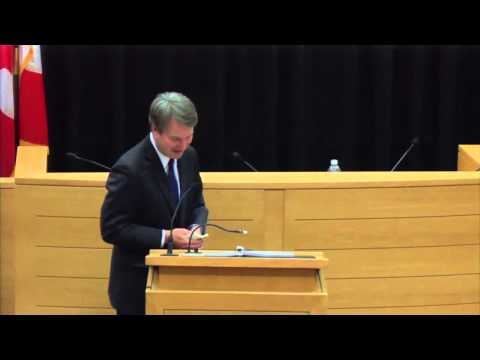 And Kavanaugh noted that if a president signs a bill “and says these certain provisions in here are unconstitutional, and we’re not going to follow those provisions, that is a traditional exercise of power by Presidents.”

In private, Kavanaugh hints at views on Mueller

In a legal opinion that same year, Kavanaugh took a similar position, saying that the president can’t ignore the law “simply because of policy objections” – and that the White House must abide by the law “unless the President has a constitutional objection” to the issue at hand.

“If the President has a constitutional objection to a statutory mandate or prohibition, the President may decline to follow the law unless and until a final Court order dictates otherwise,” Kavanaugh wrote in the August 13, 2013, opinion. He made a similar argument in a 2011 dissenting opinion.

Kavanaugh’s comments shine a light on how he viewed one of the more controversial practices of the Bush era – and it could spark questions about how he helped shape that practice while working as White House staff secretary.

Sen. Chuck Schumer, the New York Democrat and Senate minority leader, said that Kavanaugh played a “key role” in Bush’s use of signing statements and that the public deserves “full access” to records from his time as staff secretary.

“Understanding the nature of his involvement in those actions is absolutely critical to evaluating the type of justice he would be on the bench,” Schumer said in a statement to CNN. “If Republicans continue to stonewall, the American people will wonder what they are hiding.”

But Ted Ullyot, who served as deputy staff secretary under Kavanaugh, said the role as staff secretary is mostly as a “coordinator and facilitator” to compile various view points across the administration into documents to present to the President – as opposed to driving the underlying policy.

“I do not believe that would illuminate [the judicial philosophy] as it comes to Brett Kavanaugh,” Ullyot said when asked about the staff secretary documents.

Kavanaugh allies noted that the use of signing statements is hardly unusual, pointing to a 2009 memo authored by then-President Barack Obama that said: “For nearly two centuries, Presidents have issued statements addressing constitutional or other legal questions upon signing bills into law.”

But legal experts note that Bush employed the practice with more regularity than Obama did – and he frequently asserted the power of the presidency at the expense of Congress.

“President Bush wasn’t the first to use signing statements, but he used them more often than both his predecessors and successors, and, as importantly, he consistently used them to advance an aggressive theory of constitutional limits on Congress’ power to interfere with the Executive Branch that was largely a novelty,” said Stephen Vladeck, a law professor at the University of Texas and CNN analyst.

In 2006 testimony to the Senate Judiciary Committee during his confirmation hearings for a spot on the US Court of Appeals for the DC Circuit, Kavanaugh defended the use of signing statements, saying they’re used to identify “potential constitutional issues in legislation.”

Under questioning from the late Sen. Arlen Specter about signing statements, Kavanaugh said his role was to help ensure “relevant members of the administration provided input” on them, adding, “I do help clear those before the President sees them.”

Among the most controversial Bush signing statements was one accompanying a 2005 law banning harsh interrogation tactics, a law pushed through by Arizona Republican Sen. John McCain over the objections of the White House. Bush issued a signing statement suggesting the law could be bypassed, prompting an uproar at the time.

Asked by Vermont Democratic Sen. Patrick Leahy at his confirmation hearing about the signing statement on the so-called McCain amendment, Kavanaugh said: “I did see that signing statement, senator.”

Pushed about his reaction to the statement, Kavanaugh instead emphasized that the United States “does not torture.”

WASHINGTON, DC - JULY 09: U.S. Circuit Judge Brett M. Kavanaugh looks on as U.S. President Donald Trump introduces him as his nominee to the United States Supreme Court during an event in the East Room of the White House July 9, 2018 in Washington, DC. Pending confirmation by the U.S. Senate, Judge Kavanaugh would succeed Associate Justice Anthony Kennedy, 81, who is retiring after 30 years of service on the high court. (Photo by Chip Somodevilla/Getty Images)
Chip Somodevilla/Getty Images

Kavanaugh said Congress should investigate a president, raising questions about his views on Mueller

Kavanaugh added that the Bush White House had said – after the signing statement was issued – that the President “intends to follow that law as written.”

“He shook hands with Sen. McCain in the Oval Office about that,” Kavanaugh said of Bush.

Asked last week if he wanted to see records from that time to learn more about Kavanaugh’s role in that episode, Grassley chalked it up to Democrats seeking to delay “the confirmation of Kavanaugh.”

“I want to learn about what he has done in the 307 opinions and his writings about his jurisprudence and whether or not he’s qualified to be in the role of the Supreme Court,” added GOP Sen. Thom Tillis, a member of the Senate Judiciary Committee, when asked about the signing statement alongside the McCain amendment.