‘The Last Sharknado’ serves up stale buffet of warmed-over gags

Proving even bad things must come to an end, the “Sharknado” franchise breathes its last – at least for now – with its sixth installment, “The Last Sharknado: It’s About Time.” Ridiculous even by the title’s standards, this loud, obnoxious time-travel parody perhaps appropriately underscores the limits of gluttony – embodied in this case by NBC Universal’s hunger for synergistic profits.

Fans will remember that the first “Sharknado” took off all on its own, with people responding to the sheer absurdity of the title organically, amid a sea of Syfy exploitation movies. That made the inevitable sequel, “Sharknado 2: The Second One,” something of a “So bad, it’s good” celebration, and the parent company responded by piling on high-profile celebrity cameos, including plenty of NBC News talent.

Since then, however, subsequent efforts to replicate the recipe (cheekily subtitled, in order, “Oh Hell No!,” “The Fourth Awakens” and “Global Swarming”) have yielded diminishing returns, with the fifth installment dropping more than 50% from the second’s peak ratings bite.

Simply put, corporate efforts to orchestrate an “event” around something this profoundly silly undercut what had originally made the exercise unexpectedly fun – demonstrating that it’s possible to jump the shark both literally and figuratively.

Enter “The Last Sharknado,” which picks up right where its predecessor left off, with Fin (Ian Ziering) thrust back in time, fighting his way through a series of historical settings in the hope of eradicating Sharknadoes (presumably that’s the accurate plural) and saving the future. 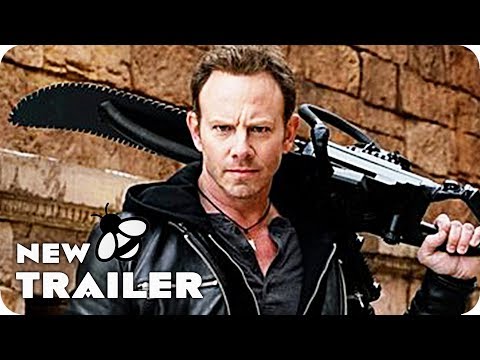 The “Terminator” riff notwithstanding, it’s again a hodge-podge of movie and pop-culture references, with the uninspired nature of the cameos suggesting even talent agents have gotten wise to the notion placing their clients in shark’s way isn’t likely to yield the exposure it once did.

Tara Reid, Cassandra Scerbo and Vivica A. Fox all reprise their roles, along with some other familiar faces and director Anthony C. Ferrante and writer Scotty Mullen. But the action is even drearier than usual, despite the ocean of possibilities baked into the premise, and the buffet of historical figures at their disposal (literally, as often as not). The movie also has the unfortunate timing to arrive right after “The Meg,” which ups the ante size-wise on summer shark fare.

Syfy asked critics to avoid spoilers in any reviews, but it’s hard to “spoil” something that has already grown this stale, serving up a composted collection of gags. The bottom line is that “Sharknado’s” insatiable pursuit of the bottom line does contain an environmental message about the perils of overfishing, until a stream that wasn’t all that deep to begin with has long since run dry.