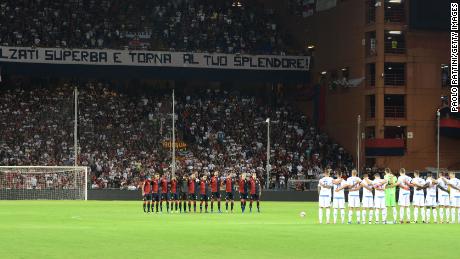 Players stand for a minute of silence to honor the 43 victims of the Genoa bridge collapse.

Genoa fans 'silent' for 43 minutes in honor of bridge victims

(CNN)Football stadiums are normally a cacophony of noise as rival supporters cheer on their respective teams.

But nearly 20,000 fans remained quiet for 43 minutes to honor the victims of the Morandi Bridge collapse as Genoa's football team returned to action on Sunday for the first time since the tragedy earlier this month.
Supporters of the Italian club had called for "a deafening silence of 43 minutes, one for each child, worker, student, father or mother who are no longer with us today."
For most of the first half against Serie A rival Empoli the atmosphere in the Luigi Ferraris stadium was muted and sombre, even when Genoa went 2-0 up.
Follow @cnnsport
After 43 minutes the names of the victims of the August 14 catastrophe were displayed on big screens to rapturous applause and from then on fans returned to their usual vocal support.
Read More
Banners commemorating the disaster were displayed around the ground and at other Serie A stadiums over the weekend.
Genoa won Sunday's match 2-1.
In photos: Genoa bridge collapse
READ: Wayne Rooney: How Juve can win Champions League with Ronaldo
Banners showing solidarity for the bridge collapse victims adorned the Luigi Ferraris stadium in Genoa.

Serena Williams has played down the news that her superhero-like catsuit will be banned for the 2019 French Open.
Bernard Giudicelli, the French Tennis Federation president, said in an interview with Tennis Magazine that Roland Garros, one of the four grand slams, is introducing a dress code.
He insisted the new rules at the French Open -- a tournament Williams has won on three occasions -- won't be as strict as Wimbledon's all-white policy, but are being implemented because he thinks "that sometimes we've gone too far."
"It will no longer be accepted," he said of the catsuit. "One must respect the game and the place."
<img class="media__image media__image--responsive" alt="Serena Williams set tongues wagging with her skintight catsuit at the French Open in June." data-src-mini="//cdn.cnn.com/cnnnext/dam/assets/180530103314-serena-williams-catsuit-french-open-roland-garros-paris-small-169.jpg" data-src-xsmall="//cdn.cnn.com/cnnnext/dam/assets/180530103314-serena-williams-catsuit-french-open-roland-garros-paris-medium-plus-169.jpg" data-src-small="//cdn.cnn.com/cnnnext/dam/assets/180530103314-serena-williams-catsuit-french-open-roland-garros-paris-large-169.jpg" data-src-medium="//cdn.cnn.com/cnnnext/dam/assets/180530103314-serena-williams-catsuit-french-open-roland-garros-paris-exlarge-169.jpg" data-src-large