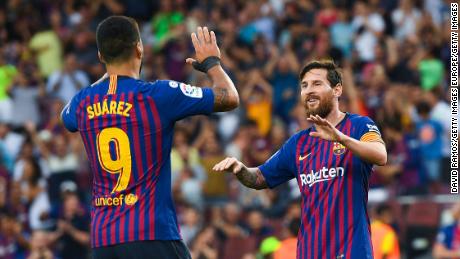 (CNN)Manchester United manager Jose Mourinho dedicates victory over Burnley to club's vice-chairman ... Cristiano Ronaldo still waiting to score for Juventus in Serie A ... Lionel Messi on the mark for Barca ... Here's your Monday recap from a weekend of sport.

The reality of life in La Liga hit minnows Huesca like a knockout punch from a heavyweight boxer.
Despite enjoying the perfect start with teenager Hernandez putting the underdogs ahead in the third minute, the newly-promoted side suffered an 8-2 thumping by Barcelona at the Nou Camp Sunday. Ouch.
Lionel Messi scored twice and provided two assists, while Luis Suarez recorded a brace and Ousmane Dembele, Ivan Rakitic and Jordi Alba also made it onto the scoresheet. Jorge Pulido assisted the Catalans with an own goal. When it rains, it pours.
Barcelona has won all three of their opening La Liga matches
Read More
Huesca had lost 8-1 in its only previous match at the Nou Camp, in the Copa del Rey in the 2014-15 season, so at least this was an improvement of sorts.
"I'm happy because we created many chances but I'm not satisfied with the two goals conceded," said Barca manager Ernesto Valverde.
The win moves unbeaten Barcelona to the top of La Liga, level on points with Real Madrid, which beat Leganes 4-1 Saturday thanks to a Karim Benzema brace and further goals from Gareth Bale and Sergio Ramos.
READ: Serena reaches US Open quarterfinals
READ: Hamilton extends F1 championship lead