Scientists believe they may have found an unlikely ally in the fight against plastic pollution – fungi.

A report published by London’s Kew Gardens claims to have found a fungus that can break down plastics “in weeks rather than years.”

Experts say the fungus, known as Aspergillus tubingensis, which was found in Pakistan, is capable of eroding plastics such as polyester polyurethane, which is often used in refrigerator insulation and synthetic leather.

“This is incredibly exciting because it is such a big environmental challenge. If this can be the solution, that would be great,” senior scientist Ilia Leitch told a news conference Tuesday.

“We are in the early days of research but I would hope to see the benefits of fungi that can eat plastic in five to 10 years.”

The report, which involved 100 scientists from across 18 countries, found that 2,189 new species of fungi were found during 2017, while an estimated 2.2 million to 3.8 million species are yet to be described.

Plastics and other detritus line the shore of the Thames Estuary in Cliffe, Kent, UK.
Dan Kitwood/Getty Images

There have been growing calls to eliminate single-use plastics across the business world, with ocean plastic waste predicted to triple by 2050.

Plastic has been found to choke marine wildlife, and has also entered the ocean food chain – exposing marine life to toxic chemicals that can end up in the food on our plates.

As well as potentially being deployed to tackle the plastic crisis, fungi are already contributing to biotechnology, medicine and food.

Scientists believe about 350 species of fungi are eaten as food, with the market for edible mushrooms estimated to be worth around £32.5 billion (about $42.3 billion) per year. 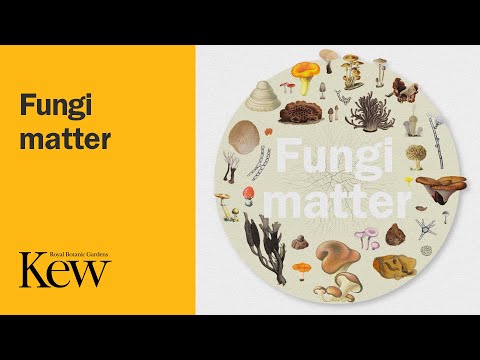 Fungi are used in a number of cheeses, alcohol, bread and UK meat substitute Quorn as well as medicines such as penicillin and statins.

“It has been a real eye-opener drilling into the data on the fungal kingdom,” Kathy Willis, director of science at Kew, said in a statement.

She added: “Their ability to play both Dr. Jekyll and Mr. Hyde roles within their environments is unparalleled. For example the fungal kingdom includes yeast, which been used for over 9,000 years to ferment food and drink, but also includes some of the most economically damaging pathogens threatening food security and natural ecosystems.”