By Judith Vonberg, Rebecca Wright and Stephanie Halasz, CNN
Published 11:39 AM EDT, Mon September 17, 2018
Link Copied!
Footage of the aftermath of the incident appeared to show the tourists sitting or lying on the pavement.
Doris Lee/Youtube
CNN  —

A disagreement between a group of Chinese tourists and a hostel in the Swedish capital has escalated into a diplomatic spat, with China accusing Sweden of violating the visitors’ human rights.

According to media reports, the family arrived at a hostel in Stockholm at around 2 a.m. on September 2 with a reservation for the next night.

Informed that they could not check in yet, they said they would wait in the lobby, but the police were later summoned, resulting in their removal from the hostel. It is currently unclear why the police were called.

“In the early morning of September 2, three Chinese tourists, including two elderly, were brutally treated by local police on the outskirts of Stockholm,” Chinese Foreign Ministry spokesman Geng Shuang said Monday, adding that China was calling for a “thorough investigation into the incident” but had so far received no information from the Swedish side.

“This is not in line with diplomatic and international common practices,” Geng said. “We urge the Swedish side to attach importance to the Chinese side’s concern and take concrete measures to guarantee Chinese tourists’ safety and legitimate rights.”

Footage of the incident appeared to show three distressed people, including one man and one woman, sitting or lying on the pavement with several police officers looking on.

“See, we are here and people are sick,” says the man in English, pointing to a person lying on the ground. “Who can help them?” 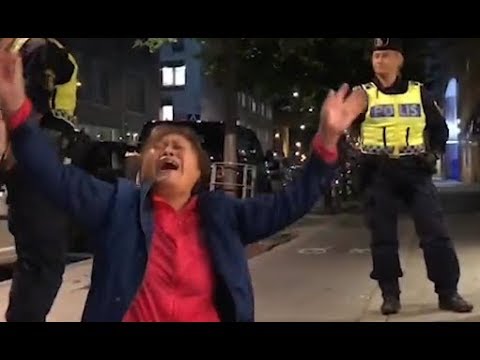 The appeal from the Chinese Foreign Ministry came two days after the Chinese Embassy in Sweden issued a strongly worded condemnation of the behavior of the Swedish police, arguing that “what the police had done severely endangered the life and violated the basic human rights of the Chinese citizens.”

The embassy also called for an urgent response to Chinese requests for “punishment, apology and compensation.”

The Swedish Foreign Ministry confirmed to CNN that the Chinese authorities had raised the matter both in Stockholm and with the Swedish Embassy in Beijing.

In a statement, the Swedish Public Prosecution Office said that a decision had been made on September 7 that “no criminal offense has been committed by the police” and therefore no investigation would be opened.