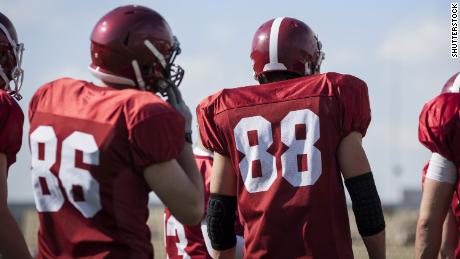 (CNN)This fall, more than a million kids, teens and young men will line up on the hash marks for another season of football. Millions more will watch, either as rabid fans or, increasingly, as concerned parents and loved ones.

It isn't just the looming threat of broken bodies or chronic brain injuries that gives people pause when it comes to the risks associated with football. Almost every year, a few young people lose their lives on the field or as an indirect result of their actions on it.
In September, a high school football player from Zebulon, Georgia, died two days after he lost consciousness during a football game at Pike County High School. According to a statement from the Georgia High School Association, 16-year-old Dylan Thomas was airlifted to a hospital after the game was halted in the third quarter. He reportedly suffered from signs of traumatic brain injury.
In June, University of Maryland offensive lineman Jordan McNair died as a result of heatstroke he developed during a practice in May. His death devastated the university's football community, and inquiries into the school's handling of his treatment are ongoing.
It's a rare but reliable tragedy: rare in that the number of deaths at any level of organized football is a tiny fraction of the overall number of participants; reliable because the deaths happen for specific and recurring reasons, and program organizers across the board have to constantly consider ways to make this inherently brutal sport less so.
Read More

Football deaths at any level are very rare