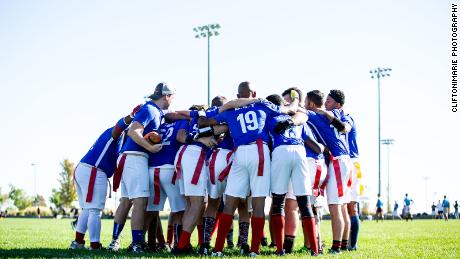 Electric runs like the 98-yard opening kickoff return for a touchdown in front of 108,000 at Penn State, or the 95-yard score at home against Northwestern, or the touchdown catches of 53 and 41 yards against Indiana State peppered his college football career.
Bryant left Purdue University in 2007 as the school's career leader in all-purpose yards, setting multiple Big Ten conference records before signing with the Pittsburgh Steelers.
Yet just a year later, the playmaker was out of football, walking away from an offer from the Tennessee Titans and reportedly ignoring a call from the Dallas Cowboys.
"I came out when I was 24 or 25," Bryant tells CNN Sport of his decision to live openly as a gay athlete about a year after ending his NFL pursuit. "It was more of my choice, I didn't try and push it."
Read More
"I never wanted to be a figurehead for a movement; I don't want to be that guy."
Dorien Bryant set records in four years at Purdue University, but walked away from an NFL contract to live an openly gay life.
READ: Black Power Salute to Colin Kaepernick: What's changed?
For the first time since childhood, Bryant, who also ran track at Purdue, took a break from sports and focused on himself. Football became an afterthought.
"It was either football or being able to live my life the way I want to live my life, and I'm happier than I ever was," he says. "I love football, but if I can't be me then it's not worth it."
Now Bryant is back in the sport as his true self, featured as the go-to receiver for the 2017 champion New York Warriors at Gay Bowl, the annual tournament of the National Gay Flag Football League.
Fifty-seven teams from 22 cities battled it out in 100-degree Denver weather last month, in seven-on-seven matches that provided a remarkable level of athleticism for a recreational league.
Bryant is one of at least seven players on the Warriors with college football experience, recruited by teammate Wade Davis, a former Tennessee Titans signee who won an NFL Europe title with the Berlin Thunder.
"The competition has progressively gotten better," says Davis, 41, a figurehead in the league who takes the Warriors' quest to repeat as Gay Bowl titleholders seriously. "The other teams have had to figure out how to get better players and better coaching."
"I'm happier than I ever was," said Byrant (#9). "I love football, but if I can't be me then it's not worth it."