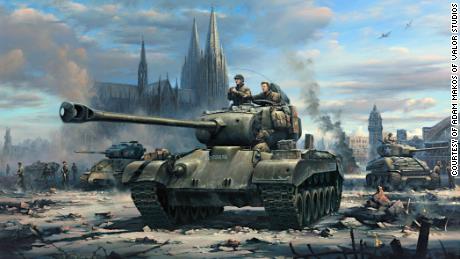 Clarence Smoyer, captured in this painting atop a tank, pointing, was haunted by a question from one battle.

(CNN)Clarence Smoyer's index finger caressed the trigger. Sweat poured down the leather flaps of his helmet. No one in his tank moved or even whispered.

It was March 6, 1945, and Smoyer was part of the Allies' last push into Nazi Germany. The lanky 19-year-old with a mop of curly hair was part of a tank crew that had crawled into the German city of Cologne for what would become the US Army's biggest house-to-house fight in Europe. The Germans called it "Endkampf," the final battle for their homeland.
"Gentlemen, I give you Cologne," Smoyer's commander announced over the radio. "Let's knock the hell out of it!"
Smoyer didn't need any added motivation. Before he entered the shattered city, he'd received word that his cousin and his wife's brother had both been killed in the war. Those bastards are going to pay, he vowed.
Clarence Smoyer during the war. He gained a reputation for deadly accuracy as a tank gunner.
Now he intended to fulfill his promise. His M26 Pershing tank had just been engaged in a shootout with a German tank at a sprawling intersection in the town's center. But then the enemy tank ducked behind a building. Smoyer searched for it, scanning a hellish urban landscape of rubble, sagging streetcar cables and collapsed buildings.
Read More
"Staff car!" someone yelled over the radio.
A black Opel streaked into the intersection. With orders to shoot anything that moved, Smoyer pressed the trigger. Bullets and tracers from Smoyer's gun smashed into the car; ordnance from another source also flew through the intersection. The car crashed into the sidewalk, and then Smoyer saw something that made the pit of his stomach fall out.
The car's passenger door swung open and a person with a light-colored sweater embroidered with flowers crumpled to the street. He saw a flash of curly brown hair.
Smoyer's adrenalin turned to horror: Did I just shoot a woman?

The past can destroy the present

Smoyer's question would force him to return to Cologne 68 years later. It would force him to reach out to an unlikely ally. And it would force him to deal with another question that may not be limited to war veterans: How do you atone for a terrible deed when you're not sure you've committed it?
How Smoyer answered those questions is the subject of an upcoming book, "Spearhead: An American Tank Gunner, His Enemy, and a Collision of Lives in World War II." Written by Adam Makos, the engrossing book is a war story and a mystery.
Yet unlike other mysteries, this was one the main character wasn't sure he really wanted to solve -- at least not at first. Smoyer dreaded the answers because still more questions had lingered at the back of his mind for decades: Was that a woman? If so, why was she there? And perhaps most important: Did she survive?
"I often thought, 'Why the hell would somebody drive into a place like that,' " Smoyer says today.
Smoyer is now 95 and long retired from his job as a supervisor at an industrial cement plant. He was married to Melba, the woman who sent him homemade fudge when he was in combat, for 70 years before she died in 2017. They had two daughters.
Smoyer with a US tank from World War II. German tanks had Americans outgunned, but Smoyer destroyed a feared German tank during a legendary battle.
Anyone passing Smoyer on the street today wouldn't imagine that he fought in one the most legendary tank duels of World War II, says Makos. He destroyed a dreaded Panther tank, one of the most formidable weapons in the German arsenal. Yet Smoyer doesn't revel in war stories. He turns the channel when war movies come on. He closes the window when Fourth of July fireworks go off. He's a big quiet guy with a nervous chuckle.
"It was hard for me to believe that he was a legendary tank gunner in World War II because he was so gentle and calm," Makos says.
Smoyer had good reason to turn away from the sounds of war. For those who fought in tanks, war was literally hell on wheels.
This is what they faced:
Men who hadn't showered in three weeks were crammed together into small metal capsules. Shells that penetrated through tank hulls ricocheted inside like supersonic pinballs. Concussion forces from the impact of shells shattered men's bones and turned their bodies to jelly, with just the skin holding their corpses together. Tanks were called "crematoriums on wheels."
"The mechanics and maintenance men used to cry when they came out from cleaning a tank," Makos says.
<div class="e