Justin Trudeau is a feminist. For him, that’s a given

When asked if he identifies as a feminist, Canadian prime minister Justin Trudeau doesn’t hesitate.

“Yes, absolutely, I’m a feminist,” he told CNN’s Poppy Harlow on the latest episode of Boss Files. “Because a feminist is someone who believes men and women should be equal, and who believes that there’s a lot more work to do to get there.”

It’s a belief Trudeau says has informed much of his work as prime minister. He made that abundantly clear after taking office in 2015, when he mandated his cabinet be 50% men and 50% women — a first in the history of the office.

Trudeau says his father, former Prime Minister Pierre Trudeau, taught him the importance of defending the rights of others. But he credits his mother and his wife with shaping him into the feminist he is today.

“I, at one point, said to Sophie, my wife, that it was really important to me that we raise our daughter Ella-Grace, to be a feminist,” he says. “And she said, ‘Yes. And your sons?’ Because I have two sons as well. And I I said, ‘Oh, oh, yeah. I guess I need to raise them to be feminists, as well.’”

Last year, Trudeau introduced a new parental sharing benefit, which provides an additional five weeks of leave for mothers and fathers when they both agree to take time off.

“You’re creating more parental involvement and investment in things like changing diapers and being part of a new baby’s life,” Trudeau says.

He also recently proposed legislation, introduced in late October, to tackle pay equity. The wage gap in Canada is smaller than in the United States — women make around 88 cents for every Canadian dollar a man earns.

“There is a problem in that women aren’t being paid what their true value is as if they were men,” Trudeau says. “We’re not getting the full economic participation or success of the women, and that’s lowering our outcomes as a society.”

The proposed legislation would create a new position, a Pay Equity Commissioner, who will have the power to audit companies and even conduct investigations.

“Where we have a role as a federal government is over the federal public service, the government workers, but also federally-regulated industries, like transport or telecom or banks. So anyone in those private sectors will have to abide by this pay equity legislation,” he says. “And there are already provinces with pay equity legislation that we’re hoping is going to end up matching where we are.”

Trudeau also recently introduced new legislation to increase women’s representation on boards. Canadian women hold only 14% of board seats, despite making up 48% of the country’s workforce. Unlike a recent California law that mandates that there be at least one woman on every public company board, Trudeau’s proposed legislation would force companies to share board member diversity information with shareholders, essentially shaming them into cooperation.

What we’ve seen time and time again is when you have more fairness, more equality, you actually create better prosperity, more opportunity for everyone.”

“So by forcing a level of transparency and making people actually explicitly say what their plan is to bring more women onto boards, more diversity onto their boards, we’re going to spur people to actually act,” Trudeau says.

Earlier this summer, Trudeau responded to allegations that he inappropriately touched a female reporter 18 years ago. He denied the allegations, saying, “I do not feel that I acted inappropriately in any way. But I respect the fact that someone else might have experienced that differently and this is part of the reflections that we have to go through.”

When asked how the #MeToo movement has changed his leadership, Trudeau told Harlow that “respecting and leaving room for multiple voices and multiple experiences is essential in our conversation.” 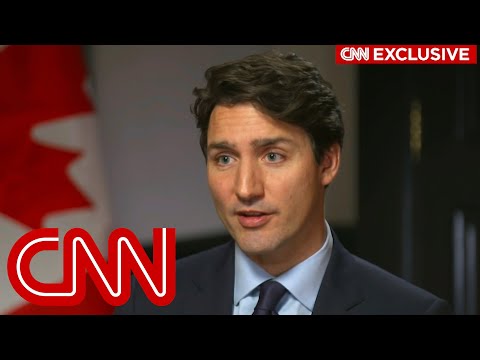 While his work for women has afforded him accolades from many, recent Nanos Research polls showed a decline in support from men for the prime minister. As one poll scientist told the Harvard Political Review, “there’s a tacit assumption that they are not a priority.”

“I can understand worries that people have any time there is a status quo that is challenged,” Trudeau says. “But what we’ve seen time and time again is when you have more fairness, more equality, you actually create better prosperity, more opportunity for everyone.”

Priscilla Chan's $61 billion mission to help the next generation

Trudeau says he’s encouraged by more conversations about male allyship, and he sees huge opportunity when it comes to teaching more men about this path.