Ryuichi Baba’s face contorts in pain as he falls down dead.

But instead of hitting the cold concrete floor, he thuds onto a soft mattress.

Moments later, Baba springs back to life and makes a thumbs up at the cheering crowd. His stylized death scene just wrapped up a shoot for “Crazy Fighter,” a low-fi action film starring martial arts fighters and ex-gangsters.

Baba spent 20 years with the mafia, only escaping his life of crime six years ago. Now a member of the Takakura-gumi acting agency, he’s part of a crew of around 60 reformed ex-gangsters who find purpose and retribution in playing their former selves.

And their efforts are slowly gaining traction in a country where gangsters are still feared and stigmatized.

“I never aspired to be an actor, but I thought that if I became recognizable and wasn’t a nobody, it would be harder for the mob to hurt me,” Baba told CNN. “That’s why I deliberately put myself out into the media spotlight.”

In Japan, organized crime groups are called the yakuza or boryokudan. Known for their strict hierarchies and honor codes, these groups engage in everything from extortion and money laundering to drugs and sex trafficking.

Far from being underground organizations, many are registered with the police and have an established presence across the country. The National Police Agency (NPA) even lists the business addresses of some yakuza organizations on their website.

During their heyday in the 1960s, the yakuza operated internationally and had as many as 184,091 members belonging to 5,216 groups in 1963, according to the Japan’s Ministry of Justice. Over the decades since, stringent crackdowns led to a steady decline in their numbers.

From 2010 to 2011, a series of regulations made it harder for gangsters to survive as it became illegal to recruit yakuza, pay them off, or share profits with them. Even securing mobile phone contracts and renting out apartments became more difficult.

The laws hit the yakuza hard. Earlier this year, Japan’s National Police Agency announced that the number of gangsters was at its lowest level in years.

Yet despite a domestic fall in their numbers, internationally, the yakuza continue to fascinate observers, with gangster films such as “Kill Bill” by US director Quentin Tarantino, “Outrage” by Japanese director Takeshi Kitano and video game series like “Yakuza” contributing to their cult appeal.

Inside a cramped room in a small town on the outskirts of Tokyo, several laptops whir while fans spew out cool air. It looks like a hacker’s paradise and is where Baba feels most at peace. These days, as well as acting, he runs his own software business and is carving out another side career as a YouTuber, voicing the character of a wheelchair-bound elderly yakuza boss, Shigewo Jhogashima, in an animated online show.

Baba said he never planned to join the mafia. But, abused by a mother involved with the yakuza and bullied as a kid, he fell into gang life. For 20 years, he made money in any way that he could to avoid getting beaten. He befriended women who worked in the adult entertainment industries and pimped their services to other establishments, turning a profit he passed on to the gang.

According to Baba, he tried fleeing a few times, but was always chased down, brought back and punished. Most of his teeth, he said, didn’t survive the beatings. He now wears a false set.

“I lived like a slave,” Baba said. “I was so scared. I felt like (the mob) had me under mind-control.” 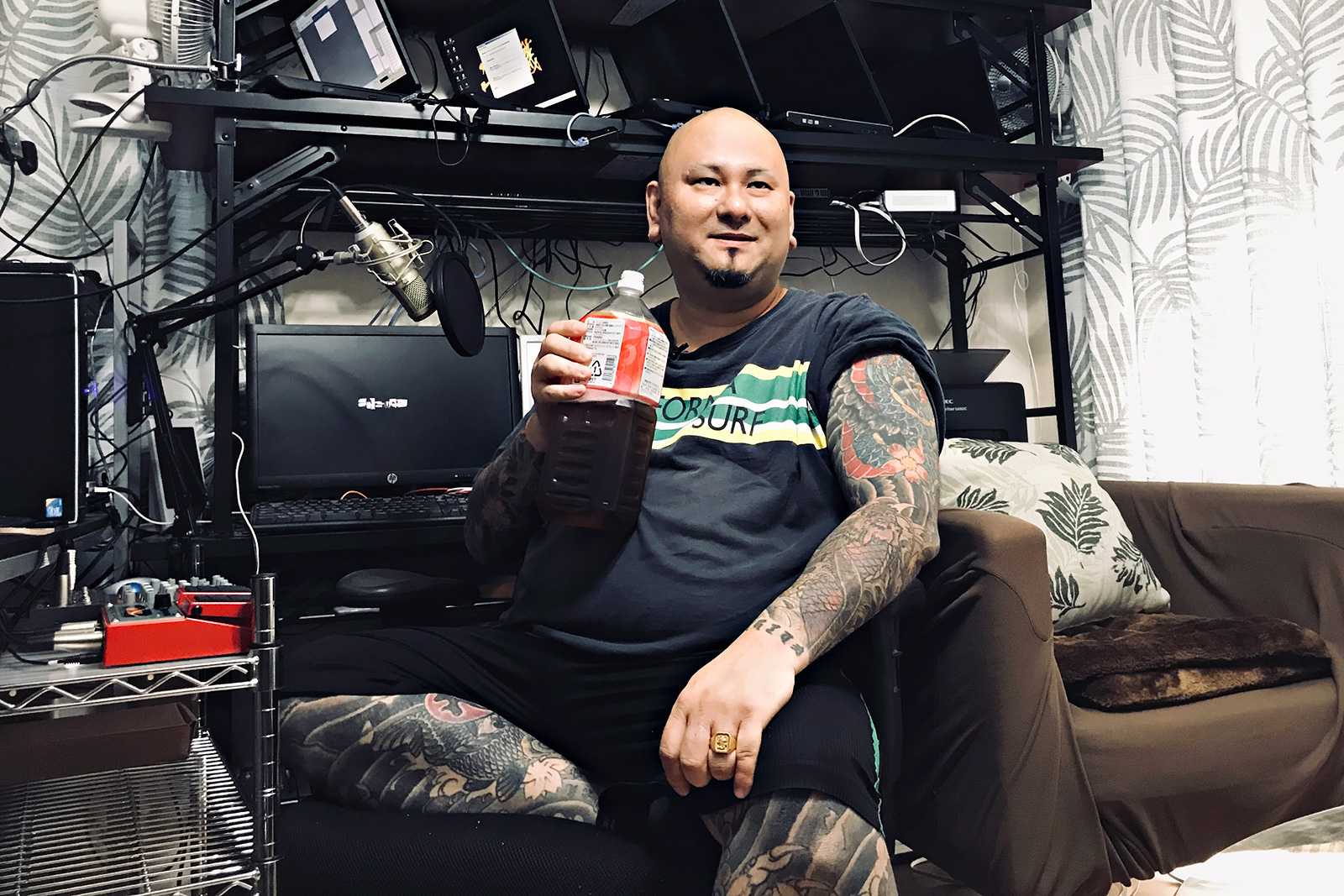 As acting doesn’t pay the bills, Ryuichi Baba runs his own software business and is a YouTuber. 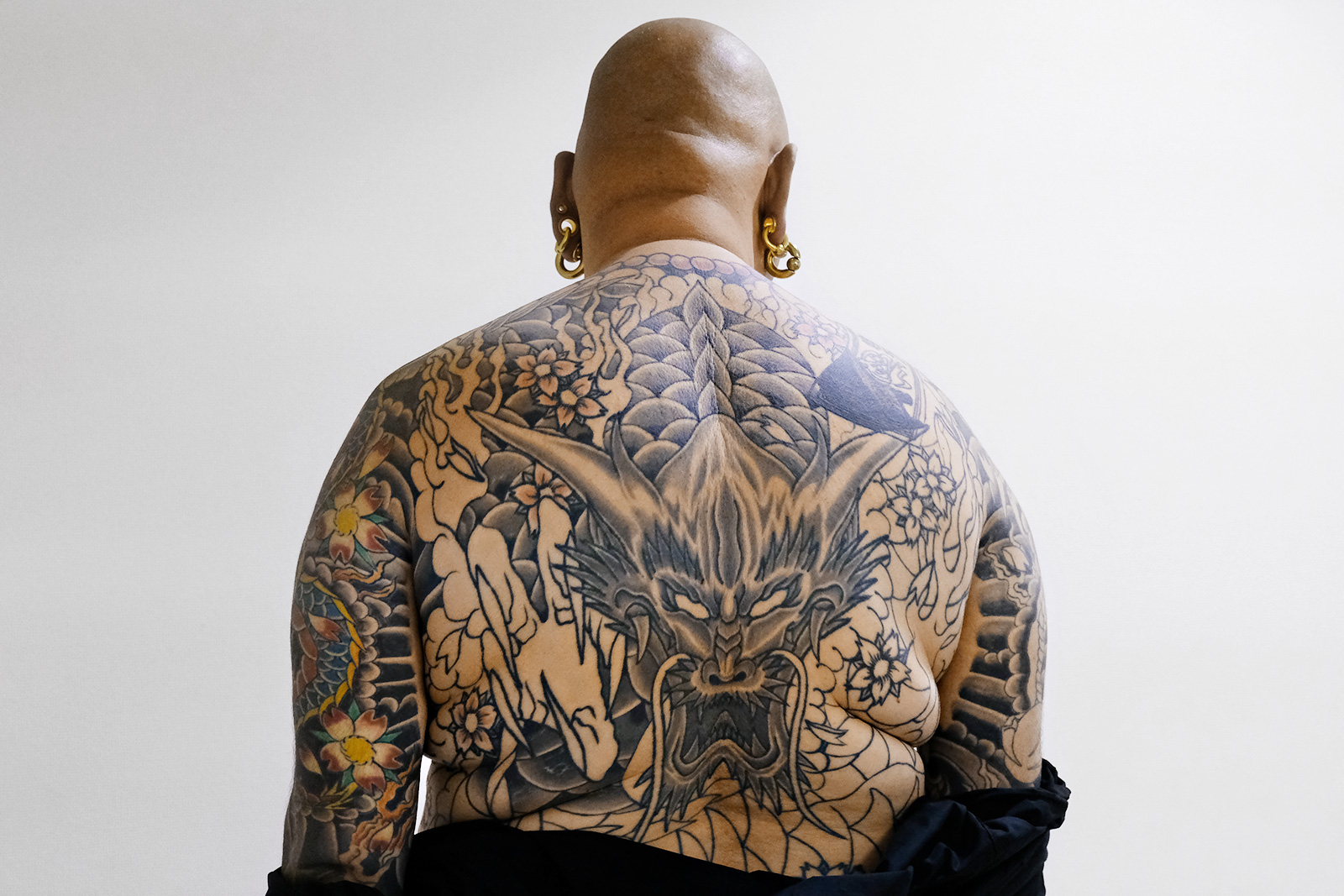 Baba spent 20 years in the mafia. 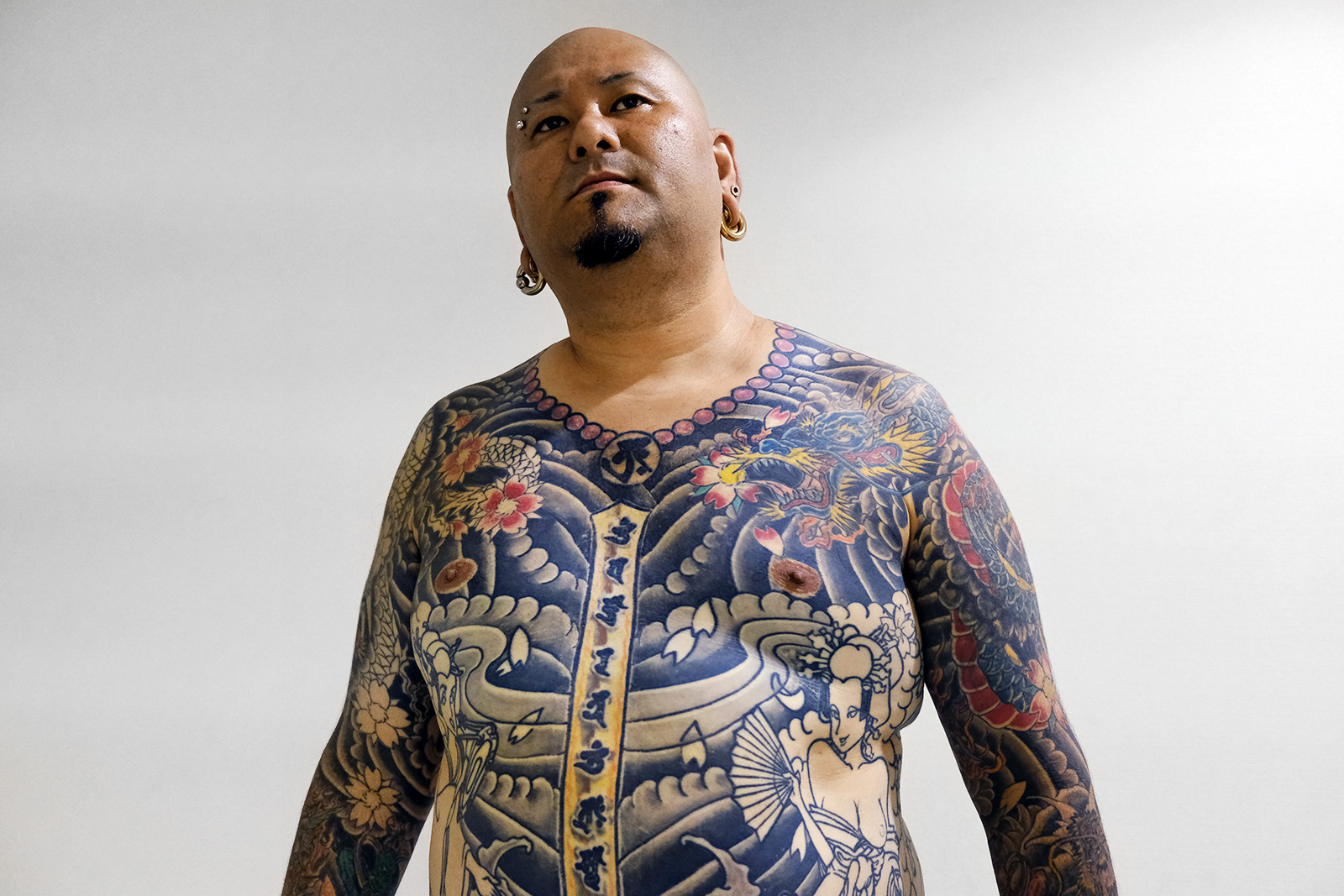 When he left, he felt like he ‘moved from hell to heaven.’

Despite this, he still hoped to leave. Baba taught himself computer skills in secret, posted clips of his tattoo work online and built up a following. The virtual world became his refuge, a safe space where he met his future wife, Mika.

“He was funny,” Mika Baba, who now acts as Baba’s manager, told CNN. “I never felt scared of him.”

Over the years, the pair exchanged lighthearted messages on a tattoo messaging board before shifting to private chat, where she slowly became his confidante.

“He’d always talk about how he wanted to leave his gang,” she said. While he was still in the mob, Baba avoided meeting Mika in person for fear of endangering her. They only met after he managed to escape his life of crime. It was a day Baba never thought he’d live to see as his depression and his feelings of being trapped worsened.

Eventually, Baba attempted to kill himself, but a warden discovered him mid-attempt at a local park and rushed him to hospital, where police told him to cut ties with his past life once and for all.

“When I left the mob, I felt like I moved from hell to heaven,” said Baba, who still takes a variety of medication to control his panic attacks.

Baba’s feeling of rebirth is one shared by other members of the Takakura-gumi acting agency, none of whom are proud of their dark pasts.

As the ex-mobsters practiced their scenes and joked with one another in the halls of a disused public hall they were using as a temporary film set, Takakura-gumi’s founder So Kuramoto said he hopes to create a less threatening image of reformed ex-mobsters.

“We’re not politicians, so we can’t change society, but we can change how people think,” said Kuramoto, a soft-spoken man with slicked-back hair.

Securing his actors screen time, according to Kuramoto, also helps promote the idea that everyone deserves a second chance. Despite this however, Takakura-gumi’s ex-mobster actors only ever play villains and thugs. Kuramoto argues their unique experience in the underworld allows them to play those roles the best.

During the filming of “Crazy Fighter,” one of Kuramoto’s actors stops a scene mid-way to advise director Shuuya Yoshimoto on how a group of yakuza would act or stand around a room according to their rank on the social ladder.

Inside a ex-yakuza talent agency

While Takakura-gumi’s actors look like they have their lives sorted, former gangsters still have a tough time reintegrating back into society. Often covered in large tattoos that signal previous ties to the criminal underworld, they face discrimination in Japan, where many hotels and other businesses still ban tattooed visitors from entering their public baths or pools lest they scare other guests.

Re-entering the workforce is no easy feat either: a 2016 survey found 80% of businesses in one city in south Japan would not hire ex-gangsters.

Furthermore, Japan places ex-gangsters who’ve served their time in jail, been otherwise convicted of mob-related offenses or affliated with the yakuza in any way on probation for five years. Treated in the same way as their criminal peers, they are prohibited from opening bank accounts and renting out properties in their name.

“It’s difficult for people to rehabilitate after you’ve left the yakuza,” actor Kenta Noguchi, who used to a henchman to a yakuza boss and biker gang leader said. He spent a year in prison, after which he said his own ties to the mob ceased. Now he’s building up his own clothing brand, but he said it’s sometimes hard for people to view reformed ex-mobsters as normal. 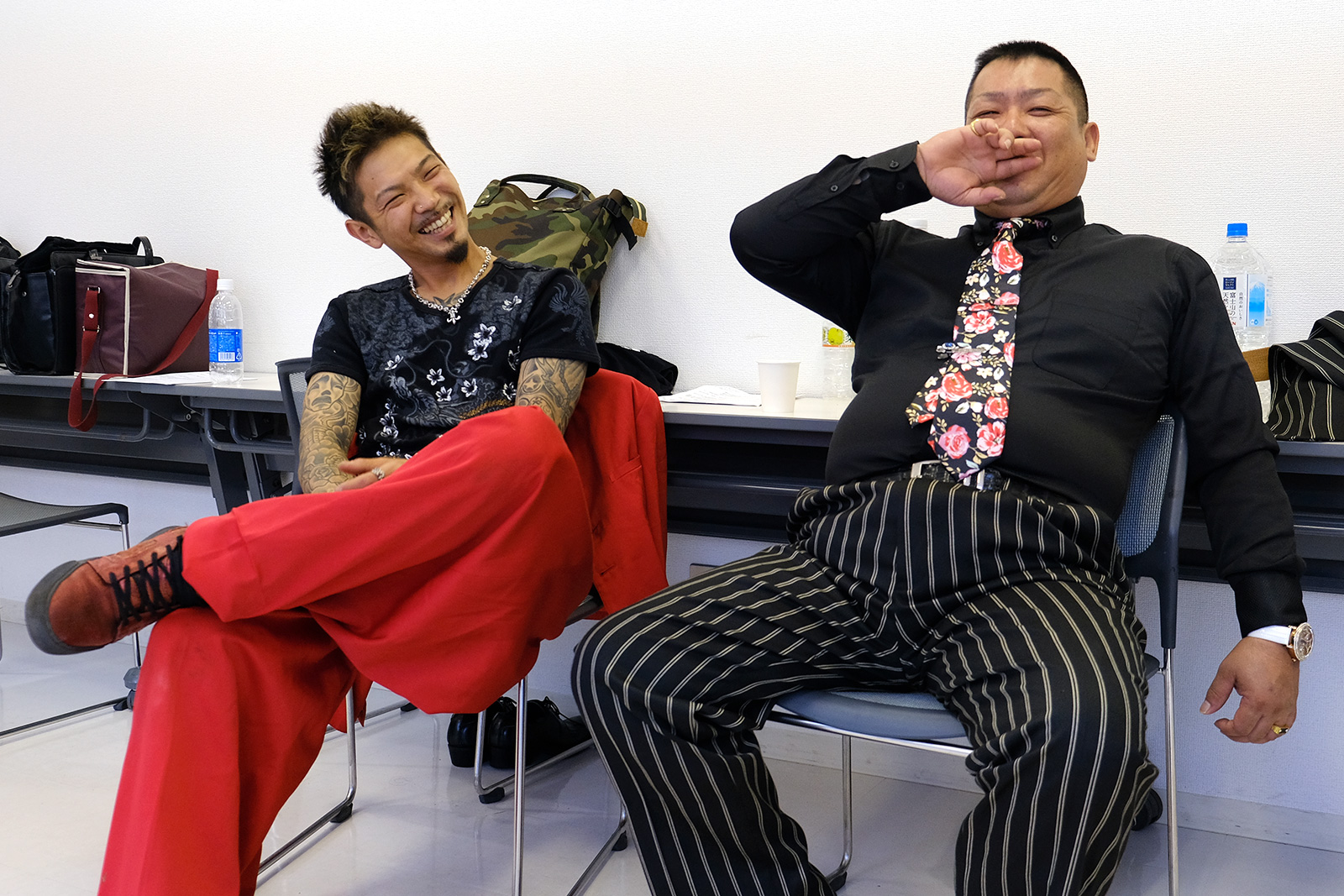 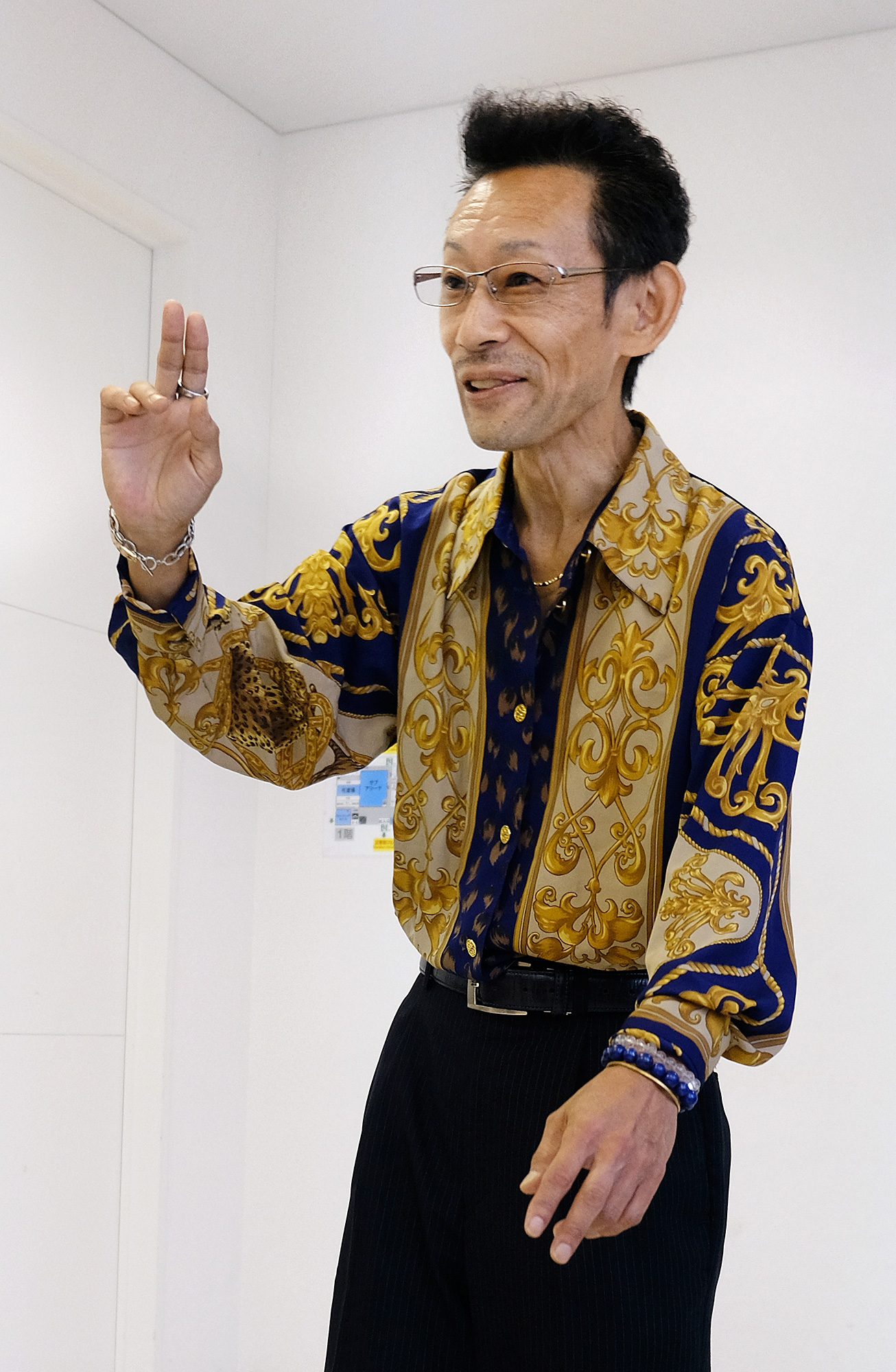 While the actors have mostly left their previous lives behind, Kuramoto said they’ve retained the more positive aspects of the yakuza and fed them into Takakura-gumi. He said his agency recruits people who feel they have something to protect. The first steps to rebuilding a life from scratch, he said, are caring for yourself and family.

In a makeshift rehearsal room, Baba starts changing out of his flamboyant costume – cowboys boots paired with a shiny gray suit. He laughs, admitting that he and the other actors are playing up yakuza stereotypes, before handing a pair of statement earrings to Mika.

“I owe everything to my wife,” Baba said. “She really supported me and helped me become the person that I am today.”