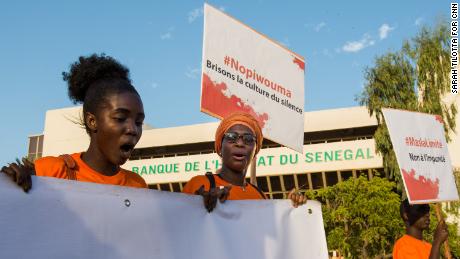 The Me Too movement was silent in Senegal. These women are trying to change that

Dakar, Senegal — In late 2017, as #MeToo spread from social media feeds in the United States, intensifying into a slew of global hashtags -- #BalanceTonPorc, #YoTambien, and #QuellaVoltaChe among them -- two women in the Senegalese capital of Dakar decided to start a movement of their own: #Nopiwouma.
Translated from Wolof into English, it means, "I will not shut up."
But it's been difficult getting women to speak out.

"Nopiwouma was never going to work like Me Too, because in Senegalese culture it's hard for us to even get people to talk about it," Senegalese blogger Ndambaw Kama (NK) Thiat, who co-founded the movement with tech entrepreneur Olivia Codou, told CNN.
In the West African country, where the majority of the population is Muslim and traditional gender roles persist, speaking out about abuse is discouraged. Wolof words like "masla" (to tolerate), "soutoura" (discretion), and "muñ" (to exercise patience, to endure) -- often used when a woman is assaulted or harassed -- reinforce this culture of suppression.
Read More
Since Thiat and Codou launched #Nopiwouma on Twitter in November 2017 and created a Google form for women to file anonymous reports, they've received more than 100 unverified accounts of harassment and abuse, many from women who had never before spoken about their experiences -- privately or publicly. Thiat and Codou say they've been sent even more via direct messages on social media platforms, texts, emails, and are often approached in person. Many who have gotten in touch are strangers, others are close friends.
"For 90% of people that write in, it's the first time they've talked about it. Many may have told their parents when they were young, but were asked not to speak out because it was going to impact their family's reputation," Thiat, 31, said over brunch at a tea and cake shop in Dakar's bustling business district.
Ndambaw Kama (NK) Thiat in downtown Dakar.
Shortly after starting her blog, World of NK, where she writes about Senegalese culture and society, Thiat started receiving personal messages and comments from women sharing stories of rape, abuse and harassment.
Unable to keep up with the volume, she opened a contributions section on her site where she could post accounts sent to her anonymously. When Thiat partnered with Codou on #Nopiwouma the concept was the same -- creating a forum for women to speak out -- but the intent was never to get women to name their alleged abusers.
"Culturally, I wasn't expecting people to come out with names, like Harvey Weinstein, because they would be too scared," Thiat said.
Since the initial public accusations of sexual abuse were lodged against Weinstein in October 2017, which he denies, an avalanche of similar allegations against powerful men around the world have followed. But while the American former film producer was arrested and charged, he has yet to be convicted of anything. Thiat says that if it's difficult to get justice in the United States, she finds it hard to imagine it happening in Senegal.
"For people to actually come out and say this is the guy who did it ... I think it's too premature for that to happen in Senegal right now," Thiat added.
According to a 2017 demographic and health survey carried out by Senegal's National Statistics Agency, 8% of Senegalese women reported having suffered acts of sexual violence at some point in their lives, but women's rights activists suspect that this number is significantly underreported.

Culturally, I wasn't expecting people to come out with names, like Harvey Weinstein, because they would be too scared

In the same survey, one in four women aged 15 to 49 have, at some point in time, experienced acts of domestic violence -- emotional, physical or sexual -- at the hands of a husband or partner.
Sexual exploitation of teenage girls in Senegal's secondary schools is widespread, according to a recent <a href="https://www.hrw.org/report/2018/10/18/its-not-normal/sexual-exploitation