Stop! In the name of love: Boy band’s emotional bid to halt Brexit

As Britain hurtles toward its divorce from the EU, one boy band has tasked itself with changing Brexit voters’ minds.

The overwrought video to the anthem “Britain Come Back” shows European boy band Breunion Boys singing, dancing and writhing on a Dutch beach.

“I cannot believe this is the end (oh no); I still feel your love inside me; I still sing your words,” they sing in the video, which was filmed earlier in December.

“Your voice paints my heart; your mirage fades away. Your choice turns my spine gray. There’s always been a sea between us, we used to sail it together – but you’re leaving, now we’re falling apart,” the band sings.

“Britain, come back to us, it is not too late to turn around.” 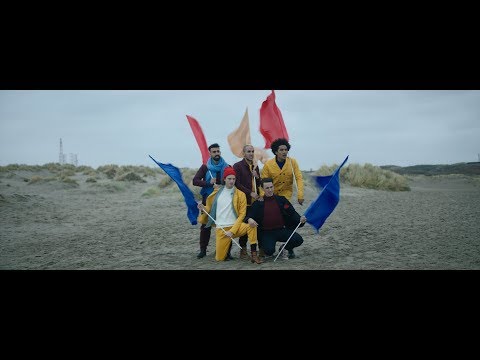 The group is the brainchild of animation artist Julia Veldman – who plans to take the band on a tour of pubs around the UK in a bid to win hearts and “look at people who dumped us (Europeans) in the eye and have a serious conversation.”

She hopes the song’s emotion can change the mind of Brexit supporters. “The leave vote was not just calculated, it was emotional,” she told CNN. “Responding to those emotions with only facts seems stupid.”

“Look how angry many Brits are towards the EU and how many Europeans are angry towards Britain for leaving,” band member Joshua Alagbe, 24, told Reuters. “We are kind of an answer to the emotion.”

A display of U.K., Union Jack flags fly in front of The Houses of Parliament, in London, U.K., on Monday, Feb. 15, 2016. U.K. lawmakers are not the only ones bracing for a tough few months before Britain's referendum on its European Union membership. A gauge of expected volatility for the pound near the highest since 2011 shows traders are expecting a rough ride too.
Jason Alden/Bloomberg via Getty Images

The non-Brits guide to Brexit (because it affects you too)

Veldman spent most of 2018 auditioning members, looking for people who would “represent the EU” before landing on three Dutch nationals, one Afghan and a Spaniard.

She denied the group was formed as joke, saying it is the crystallization of millions of Europeans wanting Britain to stay in the union.

“It is funny, but it is also very, very serious. It is how I feel … and I know there are millions of Europeans feeling the same way as I do, but it is not being expressed,” she said of the bureaucratic language coming from Brussels.

A pedestrian walks past a billboard in west Belfast on December 8, 2017 erected by Republican Party Sinn Fein calling for a special status for northern Ireland with respect to Brexit and no hard borders in Ireland. Britain and the European Union reached a historic deal on Brexit divorce terms on Friday that allows them to open up talks on a future relationship after the split. The European Commission announced that it "recommends sufficient progress" had been made by Britain on separation issues including the Irish border, Britain's divorce bill, and citizens' rights. / AFP PHOTO / Paul FAITH (Photo credit should read PAUL FAITH/AFP/Getty Images)
PAUL FAITH/AFP/AFP/Getty Images

Brexit: Why is the Irish border 'backstop' such a big deal?

The 30-year-old spent more than $13,000 of her own money on the project, relying on free help from composer Flavia Faas, who wrote the music and lyrics and devised the choreography, and a team of filmmakers to bring it all together.

Veldman said it was important that the band’s look and video be reminiscent of the girl and boy bands of the 1990s, adding wistfully: “It reminds you of the glory days of the EU, when it felt like the future was European – with Britain in it.”