A Dallas sportscaster is causing a stir for a blistering TV commentary in which he acknowledged his own “white privilege” and slammed the “covert racism” of NFL owners who won’t give talented coaches of color a chance.

Dale Hansen of WFAA made his comments in reaction to the Arizona Cardinals’ hiring of head coach Kliff Kingsbury, even though Kingsbury has no NFL experience and was just fired as coach at Texas Tech, where he had a losing record.

“Kingsbury fits all the criteria to be a head coach in the NFL. He’s an offensive genius, he’s young and he’s white – and not necessarily in that order,” Hansen said on air Wednesday night in his “Unplugged” segment.

“Young, talented coaches of color not getting the chance, that’s a huge problem. The covert racism of the NFL ownership group is so bad, the NFL had to make a rule so that minority coaches could at least get an interview.” 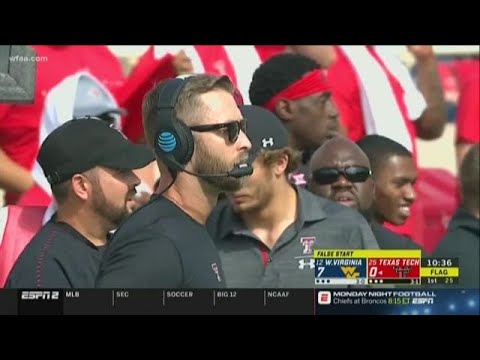 Eight NFL head coaches – five of them black – were fired at the end of the 2018 regular season which wrapped last month. The six coaches hired so far to replace them all are white.

In a league where about 70% of the players are black, only two of the 32 NFL teams currently have black head coaches.

In 2003, the NFL adopted a policy, called the Rooney Rule, requiring every team with a head coaching vacancy to interview at least one or more minority candidates.

Neither the NFL nor the Arizona Cardinals immediately responded Thursday to a request for comment.

‘I am the product of white privilege in America’

In his remarks, Hansen – who was twice named the AP’s Sportscaster of the Year – also acknowledged that his race has given him an advantage in his own career.

“I’ve had 11 jobs in my life, been fired from eight of them and moved up every time. And I am arrogant enough to tell you, I think Channel 8 was right to give me another chance,” he said. “But I am the product of white privilege in America and I’ve never denied that I wasn’t.”

Such candid statements are nothing new for Hansen, 70, who has been outspoken for years on issues of race and sexuality in sports.

He made waves in 2014 with a commentary supporting Michael Sam, who was trying to become the first openly gay player in the NFL. And last year, Hansen called Dallas Cowboys owner Jerry Jones a hypocrite for saying that any Cowboy player who takes a knee during the national anthem will be kicked off the team.

“It’s incredible to me that a player can beat up a woman and play for the Dallas Cowboys. A player can use illegal drugs, time and time again, and still play,” Hansen said. “But you take a knee to protest the racial injustice in America, and now you’ve crossed a line that he will not allow.”

On Wednesday Hansen mentioned that Cowboys secondary coach Kris Richard, who is black, appears to be a top candidate for the Miami Dolphins’ coaching job.

“After what he’s done with this Cowboys’ defense, how could he not?” Hansen said. “Unless it is true what black parents have been telling their children for decades now: You have to be twice as good to go half as far. I dream of the day when those parents are wrong, because now they’re not.”