With her raspy voice and huge smile, Channing was best known for her Tony Award-winning role as Dolly Levi in the hit Broadway musical “Hello Dolly!”

Fellow stars of the stage and screen, including “Hamilton” creator and star Lin-Manuel Miranda, paid tribute to Channing on social media Tuesday.

One of Broadway's greatest lights, Carol Channing, has passed on. She rejoins the heavens as a new diamond in the night sky, and as she famously sang, they are a girl's best friend. Goodbye and farewell, forever our Dolly. https://t.co/0u2zLcAnff

The current touring company for “Hello Dolly!” released a statement Tuesday on the star’s death.

“We are deeply saddened by the passing of the one and only Carol Channing. She was a ‘Dolly’ for the ages, and a true icon of the American Theater. Betty Buckley and the cast will dedicate tonight’s performance in San Diego to her memory.”

The actress was born in Seattle to George Channing, a newspaper editor, and his wife, Adelaide.

She grew up in San Francisco, where her parents were devout members of the Christian Science religion and her father a popular lecturer for the church.

It was her religion that first led her to the theater. Channing and her mother would stand outside venues to distribute copies of The Christian Science Monitor.

Years later Channing also found out that her father had been harboring a secret.

He was listed as “colored” on his birth certificate because of his mother, though his father was Nordic German.

Channing told CNN’s Larry King in 2002 that she was proud of her mixed heritage.

“I was 16 years old and my mother told me,” she said. “And you know, only the reaction on me was, ‘Gee, I got the greatest genes in show business.’ “

Carol Channing, whose most famous role was as Dolly Levi in the Broadway musical "Hello Dolly!" charmed audiences for decades with her trademark raspy voice and huge smile. The actress, pictured here in 1979, has died at age 97, her publicist said Tuesday, January 15.
Bettmann Archive/Getty Images
Channing, center, rehearses for a musical on CBS with choreographer Eugene Loring in 1957.
Sam Falk/The New York Times/Redux
In this undated photo, Channing celebrates her marriage to Charles Lowe, who became her manager and publicist. The star was married four times.
Bettmann Archive/Getty Images
Channing won a Tony Award in 1964 for her most famous role as the meddling matchmaker Dolly Gallagher Levi in "Hello Dolly!"
Mark Kauffman/The LIFE Images Collection/Getty Images
Channing celebrates her Tony win alongside "Hello Dolly!" director Gower Champion, composer and lyricist Jerry Herman, producer David Merrick and costume designer Freddy Wittop in 1964. The original production won 10 Tony Awards.
Jim Mooney/NY Daily News Archive/Getty Images
The performer appears during the 1965 shooting of her Emmy-winning TV special "An Evening With Carol Channing," which would air the following year.
CBS Photo Archive/Getty Images
The actress with her son, Channing Carson, in their New York apartment in 1965.
John Rawlings/Conde Nast/Getty Images
Channing's best-known film role was as Muzzy Van Hossmere in the 1967 musical "Throughly Modern Millie" with Julie Andrews, left, and Mary Tyler Moore. She won an Oscar nomination and Golden Globe for best supporting actress for the movie.
Mondadori Portfolio/Getty Images
Channing performs during halftime of the Super Bowl in 1972 in New Orleans.
Diamond Images/Getty Images
Channing, here in 1989, was a darling of small screen as well, appearing in TV shows such as "Rowan & Martin's Laugh-in" and "The Love Boat."
JD Dabrowski/NBC/Getty Images
Channing places her feet in wet cement in front of the Embassy Suites Hotel in New York in November 1990 as part of an unveiling ceremony at the hotel.
Chrystyna Czajkowsky/AP
President Bill Clinton greets the Broadway star after her performance at a White House dinner in February 1993. The event was the first official dinner hosted by Clinton at the White House.
Wilfredo Lee/AP
Channing thanks the audience in a curtain call after a performance during a revival of "Hello, Dolly!" in New York in January 1996. She reprised the role in multiple productions over the decades. Here, she was celebrating her 4,500 performance of the legendary show.
AUBREY REUBEN/ASSOCIATED PRESS
Channing performs at an event in Los Angeles in October 2003.
Giulio Marcocchi/Getty Images
Channing with her fourth husband, Harry Kullijian, at the Village Theater in New York in 2003. They had been childhood sweethearts and reunited 70 years after attending middle school together. Kullijian died in 2011.
Bruce Glikas/FilmMagic/Getty Images
LL Cool J and Channing share a moment before presenting the Tony for best original score to "Avenue Q" in June 2004.
KATHY WILLENS/AP Photo
Channing in her home in Modesto, California, in July 2009.
Andy Alfaro/Sacramento Bee/MCT/Getty Images
Channing dons a "Hello, Dolly!" costume during her 90th birthday celebration in Hollywood in February 2011.
David Livingston/Getty Images
Channing is joined by her husband, Harry Kullijian, left, and actor Davis Gaines as they attend a musical tribute for her 90th birthday in 2011.
Brian Putnam/FilmMagic/Getty Images
Channing arrives at the Palm Springs International Film Festival Awards gala in California in 2015.
Axelle/Bauer-Griffin/FilmMagic/Getty Images

After a brief stint in college, Channing moved to New York, where she made her stage debut in “Never Take No for an Answer” and was an understudy in “Let’s Face It.”

But her role as the diamond-loving showgirl Lorelei Lee in the Broadway musical “Gentleman Prefer Blondes” in 1949 made her a star. Channing lost out on the role in the 1953 film adaptation to Marilyn Monroe. 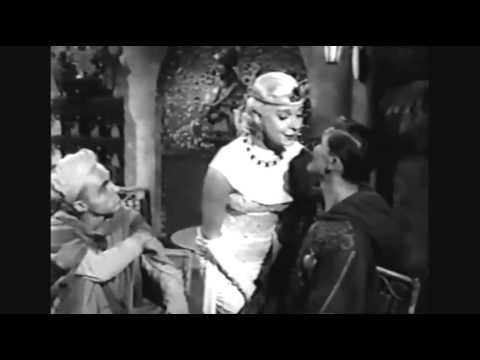 Broadway continued to be her showcase, and she had another big hit in 1964 as Dolly Gallagher Levi in “Hello Dolly!”

It became the role that would help to define her career, and she reprised it in multiple productions over the decades.

“It was all special,” Channing told Broadway World in 2014 of her favorite memories of the original production in honor of the 50th anniversary of the musical. “I suppose that sounds cliché, but it’s true. Every bit of the production, from opening night to the last night of the tour.”

She won a Golden Globe and was nominated for an Academy Award for the role of Muzzy Van Hossmere in the 1967 movie musical “Thoroughly Modern Millie.” The film would forever have Channing identified with the now iconic line “Raspberries!”

Channing also became a darling on the small screen, appearing on TV quiz shows and other programs including “Rowan & Martin’s Laugh-In,” “The Love Boat,” “Touched by an Angel” and “Family Guy.”

Channing and Kullijian, a former city councilman in Modesto, California, reunited 70 years after they attended middle school together and married in 2003. He died of an aneurism in 2011.

The following year her life and career was celebrated in the documentary “Carol Channing: Larger Than Life.”

Channing continued to work well into her 90s. She was hailed throughout her long-running career, including being inducted into the American Theatre Hall of Fame in 1981 and receiving a lifetime achievement award from the Tonys and the Drama Critics Circle in 1995 and 1996, respectively.

She is survived by her son, cartoonist Channing Carson.

CNN’s Stella Chan and Madeleine Thompson contributed to this report