Speaker Nancy Pelosi canceled a planned trip to visit troops in Afghanistan Friday, after – her office alleged in a statement – the White House leaked the details of the congressional delegation’s commercial plane travel.

“In the middle of the night, the State Department’s Diplomatic Security Service provided an updated threat assessment detailing that the President announcing this sensitive travel had significantly increased the danger to the delegation and to the troops, security, and other officials supporting the trip,” Pelosi spokesman Drew Hammill said. “This morning, we learned that the administration had leaked the commercial travel plans as well.”

Which, to borrow the parlance of the Internet, is VERY big, if true.

It’s one thing for Trump, as he did on Thursday, to rescind the military plane Pelosi and the rest of her colleagues were planning to fly on as a way of exacting revenge on her for asking the President to delay his planned “State of the Union” speech on January 29. To do so publicly – White House press secretary Sarah Sanders tweeted out the letter Trump sent to Pelosi – is to raise the stakes. To leak commercial travel plans to make absolutely certain that Pelosi can’t go on the trip is a bridge even further.

Now, to be clear, this is an allegation made by Pelosi without corroboration to date. And, the White House denies it. “When the Speaker of the House and about 20 others from Capitol Hill decide to book their own commercial flights to Afghanistan, the world is going to find out,” a White House official told CNN’s Sarah Westwood and Kevin Liptak. “The idea we would leak anything that would put the safety and security of any American at risk is a flat out lie.”

Speaking to reporters Friday on Capitol Hill, Pelosi again accused the administration of leaking their travel plans, saying Trump “outed ” their trip. She added that the President’s staff should know better, and that their “very irresponsible” actions endangered members of Congress as well as anyone traveling on the same flights.

Of course, if it’s clear that Trump’s White House didn’t do what Pelosi’s office is alleging, it could boomerang back on her.

But this charge isn’t being made by just anyone. The allegation that the White House leaked information about their travel plans is coming from the speaker of the House. Presumably, Pelosi’s office wouldn’t make such a serious allegation – essentially that the White House is endangering members of Congress (and the troops they would be visiting) – if they didn’t feel pretty damn sure about it.

So here we are. The White House will HAVE to say something about all of this. Is Pelosi’s office right that the Diplomatic Security Service said in a threat assessment that Trump had “significantly increased the danger to the delegation and to the troops?” Did someone in the White House find out about Pelosi’s commercial flight plans and leak them?

Was that done to make sure she couldn’t go to Afghanistan amid the now 28-day-long government shutdown? 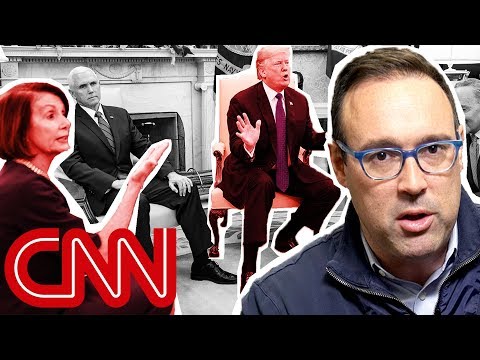 Regardless of what the White House says – or, knowing this White House, what they don’t say – Pelosi’s allegation amounts to a ramping-up of tensions, which were already very, very high, between the speaker and the President.

We’ve spent this week spectating a tit-for-tat battle between two of the most powerful people in the country that has significantly dimmed the prospect of ending this longest government shutdown in political history.

In order for deals to get done, for compromise to be possible, you need trust. One side has to believe that they can take the word of the other side. That if the White House says they will do something, then congressional Democrats can depend on it getting done.

Right now, there is zero trust between the two sides. Pelosi is alleging that Trump’s White House, out of pure vengeance, leaked information that put her and others members of Congress in jeopardy. The Trump White House is calling those allegations a “flat out lie.”

Which is bad news for the 800,000 federal workers who have been either furloughed or working without pay for a month now.

And for the rest of us too, who are watching our government’s slow-motion failure right in front of our eyes.