Can the Congo save itself, and its mythical okapi, from destruction?

(CNN)A nudge above the equator in one of the most biodiverse places in Africa lives an almost-mythical mammal that few people have ever seen.

The striped okapi is often described as half-zebra, half-giraffe, as if it were a hybrid creature from a Greek legend. So rare is the okapi, that it was unknown to the western world until the turn of the 20th century.
While the okapi is virtually unheard of in the West, its image pervades life in the Democratic Republic of Congo -- the only country in the world where it is found living in the wild -- gracing cigarette packets, plastic water bottles, and even the back of rumpled Congolese Francs. The okapi is to the Congo what the giant panda is to China or the kangaroo to Australia.
Clockwise from top: A 50 cent Congolese Franc note with the okapi; the Okapi on a government ranger's uniform; the okapi gives its name to many local businesses.
But decades of misrule under a succession of dictators has seen much of the Congo's natural resources spin out of the government's control, and okapi numbers fall by 50% since 1995.
Today, only 10,000 remain.
Read More
Three decades ago, an American scientist made it his life mission to protect this rare mammal by co-managing the Okapi Wildlife Reserve in eastern Congo. The reserve is roughly the size of Yellowstone National Park, in the United States, but that's where the similarities end.
The Okapi Wildlife Reserve is among the most dangerous places on earth to visit.
Armed militia stalk the dirt roads, illegal gold and diamond mines operate with near impunity and ivory poachers are rife. Compounding matters, the region is currently battling the country's worst Ebola outbreak to date.
This week, as the country accepts opposition candidate Felix Tshisekedi as winner of a disputed landmark election, the nation stands on a precipice.
The okapi's fate, once again, rides on the country's next move.

When 37-year-old John Lukas touched down in the capital of Kinshasa aboard a rickety cargo plane in the late 1980s, the Congo was a very different place to the one he navigates today.
This vast nation that spans two time zones had not a single road joining east to west. But under military dictator Mobutu Sese Seko, the flamboyant leader famed for his leopard-print hats, life was relatively stable, says Lukas. After independence from Belgium in 1960, hope was in the air.
"Under Mobutu, any person in the Congo could go anywhere safely," he says. "You never felt threatened."
Mobutu Sese Seko sporting his signature headgear.
A Florida-based zoology graduate, Lukas had been leading Big Game safaris in eastern and southern Africa for years, but there was one strange animal he had seen in American zoos and longed to admire in the wild.
About the size of a horse, the okapi is a close relative of the lanky and long-necked yellow giraffes we know today. "It is amazing biology," says Lukas. The okapi can lick the back of its own neck with its 18-inch tongue, and its glossy coat feels like velvet. Most newborns of any species defecate within 12 hours of birth, says Lukas, but okapis hold their first stool for 60 days, to avoid giving leopards a scent to hunt. An okapi can twitch each ear independently.
Lukas was smitten.
In 1987, he arrived in Epulu -- a seven-day overland journey from Goma, a city in the east -- with a group of talented conservationists. In the 1980s, the Congo had an active Ministry of Environment serious about protecting the country's natural bounty, and Lukas' group worked with ministers to promote the country's national animal. In 1992, the Okapi Reserve was officially recognized by the government.
Under Mobutu, this part of the Ituri Rainforest had been earmarked as a mineral reserve, to protect future mining opportunities. As a result, it was virtually free of development, providing the ideal habitat for the reclusive okapi.
Mbuti pygmies village have been living in the Ituri rainforest for thousands of years. The Okapi Reserve supports their nomadic lifestyle, providing healthcare and financial assistance.
"Our mission from the government was to ... make Epulu known for the okapi. To let people see the animal," says Lukas.
Felly Mwamba, a trader who was born and grew up in Kinshasa, explains that while everyone in the Congo knows what an okapi is, most people have never seen one in real life. "Many years ago, I saw one in Kinshasa Zoo," Mwamba says. "But they aren't there any more."
Joining Lukas were Congolese conservationist Jean N'lamba, Swiss zoologist Karl Ruf and his wife, former office worker Rosmarie Ruf, who had followed her husband to Africa, as well as officials from the Congolese Wildlife Authority (ICCN).
It was not a life-threatening mission. The okapi was not an endangered animal.
That all came later.

An African donkey, I presume

The West got its first whiff of the okapi in 1890 when Welsh journalist Henry Morton Stanley had puzzled over a strange "African donkey" in his book.
After the British government declined to fund his exploration of the Congo, Stanley was approached by King Leopold II of Belgium, who was eager to exploit Africa's wealth.
Using forced labor, Stanley oversaw the backbreaking construction of roads across the Congo, helping Leopold claim the territory as a private fiefdom.
Congo was 76 times the size of Belgium, and Leopold got rich off its ivory and vast rubber reserves without ever stepping foot there.
Scant investment was made in the Congo or its people, and by the time the Belgian government took control from Leopold in 1908, millions of Congolese had died or been mutilated: One particularly barbaric act saw locals who failed to meet their rubber quotas punished by having their hands chopped off.

In the early 20th century, the roads that rapacious colonization had built now ferried a trickle of adventurous visitors from the West across the territory. One such tropical tourist was Harvard-educated Patrick Putman, who in 1933 alighted in the eastern Congo and opened a small hotel and a roadside zoo in Epulu, where he lived with a succession of American and African wives. It was the first time okapis had been domesticated in Epulu. 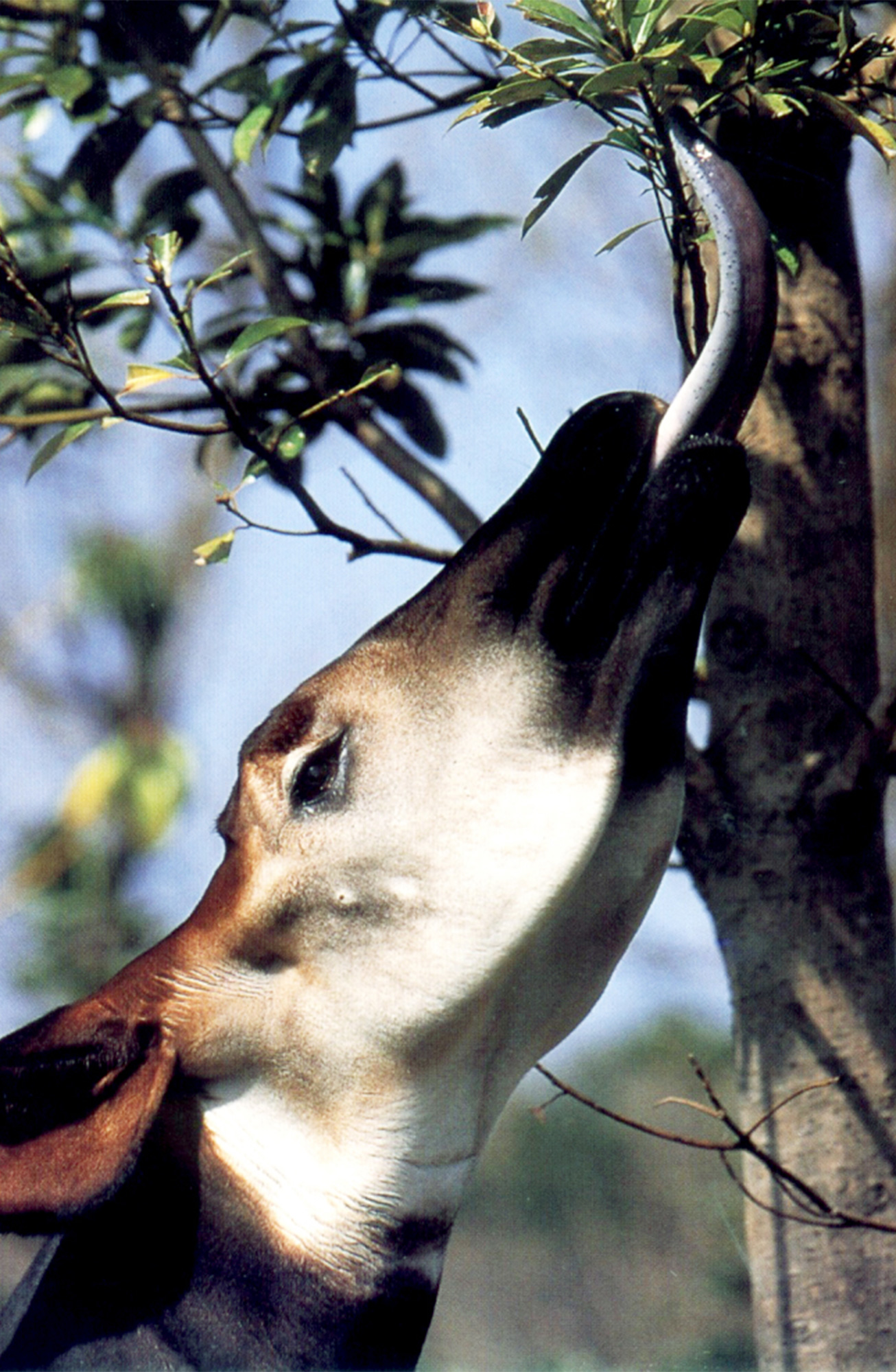 An okapi's tongue can be 18-inches long. 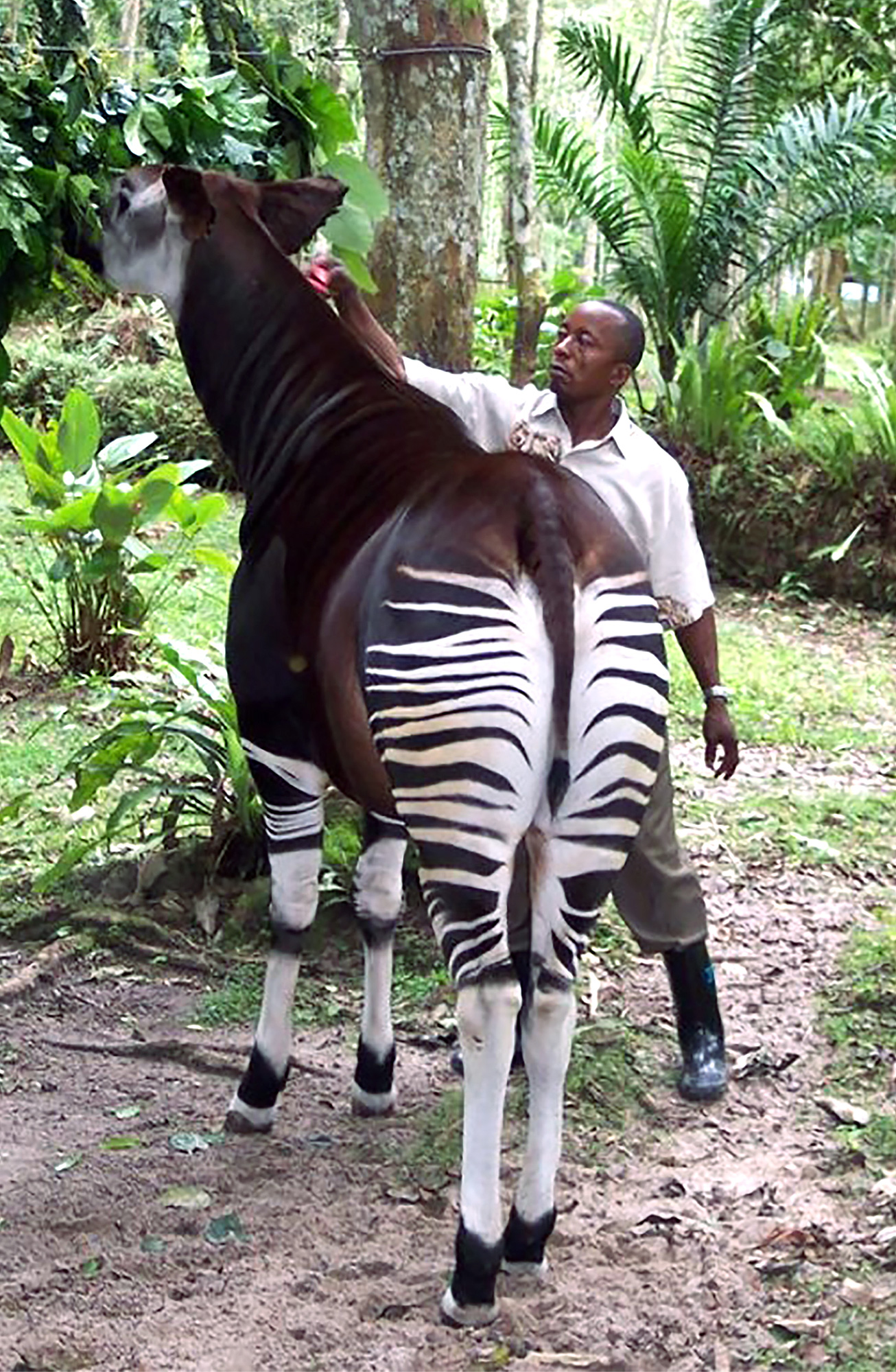 An okapi being fed at the reserve.

"They were a novelty to Western people," says Lukas.
Previously, it was believed the okapi was a new species of zebra. It was only later, when okapi skeleton was analyzed, did naturalists realize they had a giraffe on their hands.
Putman died in 1953 and seven years later the Congo gained independence, sparki