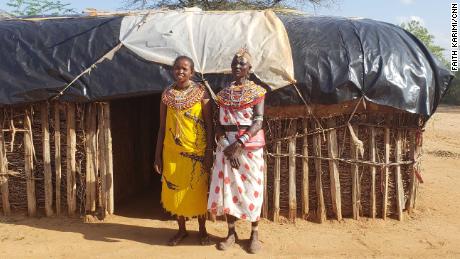 Rosalina Learpoora (left) is shown with Jane lengope, 45, one of the founders of the village, outside the latter's home.

Umoja Village, Samburu County, Kenya — Rosalina Learpoora has always been surrounded by women.
At age 18, she lives in an all-women village in northern Kenya, where she spends her evenings doing homework, fetching firewood or beading colorful jewelry.
Learpoora has called Umoja home since she was 3. There, a group of 48 women live with their children in huts protected by thorny brush to keep away intruders. When a man trespasses, they notify the local police, who either issue a warning or arrest the culprit -- depending on the number of offenses.
The village was started in 1990 by 15 women who became stigmatized in their communities after they were raped by British soldiers from a base at nearby Archer's Post, a trading center bordering Samburu and Isiolo. Some of the rape survivors say their husbands accused them of bringing dishonor to their families and kicked them out. They found a piece of land, moved there and named it Umoja -- Swahili for unity.
It has since grown into a refuge, welcoming women escaping abusive marriages, female genital mutilation, rape and other forms of assault. Even some women whose husbands died have found solace and a home there.
Rosalina Learpoora, 18, has lived in Umoja village since she was 3. Umoja is the Swahili word for unity.
Read More

She fled there to escape genital mutilation

Learpoora never met her father -- she was told he died when she was 3. Terrified that her extended family would force her to undergo female genital mutilation, her mother strapped her to her back and fled to Umoja, where they've lived as part of the sisterhood for 15 years.
The women of Umoja are all of the Samburu culture, an extremely patriarchal society that practices female genital mutilation and believes in polygamy.
Umoja women span generations, with the oldest resident at the village aged 98 and the youngest six months old. Women of all ages flee there, some with newborn babies in tow.
When the boys who live there with their mothers reach 18, they have to move out of the village, Learpoora says.