Meteor lights up the night sky over northern Florida

People across northern Florida were baffled shortly before midnight Saturday by a greenish-blue fireball that seemed to plummet from the sky.

“Caught some strange light falling from the sky up by Youngstown tonight!,” posted Eric Shultz, who captured the phenomenon on his doorbell camera at his home in the state’s panhandle.

Caught some strange light falling from the sky up by Youngstown tonight!

“Dude, did you see that?!,” someone exclaimed in this video shot on Jeffrey Cardona’s dashcam in Jacksonville.

It turns out the bright light was from a meteor, according to the National Weather Service. Its flash was caught on the Geostationary Lightning Mapper (GLM), a satellite that takes hundreds of images each second and maps the paths of lightning storms.

“Meteors coming into the Earth’s atmosphere happen fairly often but we don’t always get to see them,” said CNN meteorologist Haley Brink. “Nowadays we have so many satellites in space and cameras on the ground that these events are becoming more and more visible to the general public.”

Sightings of the meteor were reported across north Florida.

“Tonight I was out on my way home and I saw something pretty crazy,” said a YouTube user in Gainesville. “Luckily, my dash cam caught it.” 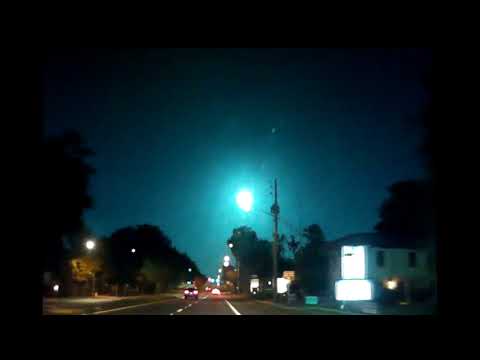 It’s not clear whether the meteor hit Earth or burned up in space.

The National Weather Service said it heard unconfirmed reports that the meteor landed near Perry, Florida, some 55 miles southeast of Tallahassee.

If someone thinks they found pieces of the meteor, scientists would need to run tests to determine if it is in fact a space rock.