What do we say to the god of death?

According to the latest data from NASA, the Earth has a long-distance date with a 1,100-foot-wide asteroid in 2029. The giant space rock has the fitting code name 99942 Apophis, the Greek name for an Egyptian serpent god hell-bent on swallowing the sun. (For the record, it’s also the name of a “Stargate-SG1” character with a similar motivation.)

There’s no need to freak out, though. Apophis will miss the Earth by a healthy margin of 19,000 miles. Still, its size and relatively close distance to Earth means its flyby will be a special moment for astronomers and other scientists.

“The Apophis close approach in 2029 will be an incredible opportunity for science,” Marina Brozović, a radar scientist at NASA’s Jet Propulsion Laboratory in Pasadena, California, said in a NASA release. According to NASA, it’s relatively rare for such a large object to pass so close to Earth.

This very detailed view shows the strange peanut-shaped asteroid Itokawa. By making exquisitely precise timing measurements using ESO's New Technology Telescope a team of astronomers has found that different parts of this asteroid have different densities. As well as revealing secrets about the asteroid's formation, finding out what lies below the surface of asteroids may also shed light on what happens when bodies collide in the Solar System, and provide clues about how planets form. This picture comes from the Japanese spacecraft Hayabusa during its close approach in 2005.
ISAS/JAXA

Water found in samples from the surface of an asteroid

“We’ll observe the asteroid with both optical and radar telescopes,” Brozović said. “With radar observations, we might be able to see surface details that are only a few meters in size.”

In fact, Apophis may even be visible to the naked eye as a bright spot of light.

Path Along Earth Where Apophis Astroid Will Be Visible on April 13, 2029 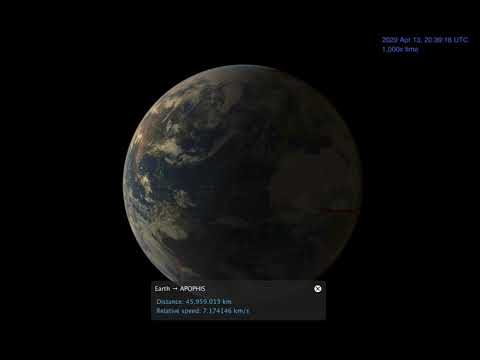 For regular civilians who have even a passing fear of being decimated by space detritus, it’s very comforting to know the scientific community is genuinely excited about the arrival of a massive rock named after a god of death. It is the subject of much speculation and conversation at this week’s Planetary Defense Conference in College Park, Maryland, where various international agencies gather to discuss the discovery and study of (and possible defense against) near-Earth objects.

Asteroids -- such as the ancient asteroid Bennu pictured by NASA in November 2018 -- could be harder to destroy than scientists previously thought, according to a Johns Hopkins study.
AP

It appears Apophis may in fact be a generous god, and provide scientists lots of insight on what to do if a more dangerous near-Earth object ever comes our way.

“Apophis is a representative of about 2,000 currently known potentially hazardous asteroids (PHAs),” Paul Chodas, director of the Center for Near Earth Objects Studies, said in the release. “By observing Apophis during its 2029 flyby, we will gain important scientific knowledge that could one day be used for planetary defense.”