Sandra Bland recorded her own arrest in 2015. The video was just published

Newly published video shows the controversial 2015 traffic stop arrest of Sandra Bland from her vantage point, and her family’s attorney questions why the footage didn’t emerge before now.

The 39-second video, which Bland recorded on her cell phone, was published Monday by Dallas TV station WFAA in partnership with nonprofit news organization The Investigative Network.

Like a previously released police dashboard camera video, this one shows Texas state trooper Brian Encinia pointing what appears to be his Taser at Bland and yelling “I will light you up!” while she sits inside her car.

But this one shows what the encounter – which happened after she was pulled over for failing to use her turn signal – looked like from inside the vehicle.

Three days after her arrest, she was found hanging in her Waller County jail cell – a death that authorities ruled a suicide. Her death drew national attention to the case, with her family arguing she never should have been arrested, and protesters saying her arrest was an example of bias and excessive use of force by police against African-Americans.

Cannon Lambert, an attorney for Bland’s family, told CNN that Monday was the first time he or the family had seen Bland’s cell phone video. He said he believes the video’s emergence confirms the family’s fears that a special prosecutor didn’t do everything to ensure a fair case.

Encinia was indicted on a perjury charge and fired in 2016 after a grand jury said it didn’t believe his statement that he removed her from the car so he could conduct a safer traffic investigation. But it was dismissed in June 2017 after he agreed to surrender his law enforcement license.

It would be “troubling” if the prosecutor had the video when the charge was dropped, Lambert told CNN.

But the Texas Department of Public Safety said Tuesday that it had not concealed the video, and that the video was referenced multiple times in the Texas Rangers’ report on their investigation of the case.

The TDPS also said that the video has been treated as public information available upon request, and that is how a reporter with The Investigative Network received it.

The reporter, then working with Austin TV station KXAN, filed a public information request for the video in August 2017, and the department provided the video to him “at that time,” the TDPS said.

WFAA noted the video was released after the criminal investigation was closed.

The special prosecutor, Darrell Jordan, did not immediately respond Tuesday to CNN’s request for comment about the video.

Lambert said that to his knowledge, Bland’s family has not called for a re-opening of the case.

No one was convicted of any crime relating to Bland’s arrest or death. In September 2016, Bland’s family reached a $1.9 million settlement in a wrongful death lawsuit against Waller County.

Sandra Bland, 28, died of suicide in her jail cell in Waller County, Texas, three days after her 2015 arrest, authorities said.
From Facebook

In the arrest warrant, Encinia said Bland was “combative and uncooperative” after he stopped her for failing to use her turn signal while changing lanes in July 2015 in Prairie View, about a 50-mile drive northwest of downtown Houston.

Encinia wrote that Bland was placed under arrest “for assault on a public servant,” having swung her elbows at him and kicked him.

As Encinia stands outside her vehicle during the traffic stop, things get tense when he asks if she is OK and says she seems irritated.

“I am. I really am,” Bland, seated in the car with her window down, responds. ” ‘Cause I feel like it’s crap for what I’m getting a ticket for. I was getting out of your way. You (were) speeding up, tailing me, so I move over, and you stop me. So yeah. I am a little irritated, but that doesn’t stop you from giving me a ticket.”

The conversation escalates after the trooper asked Bland to put out her cigarette.

She says that she is in her car and asks why she has to put out her cigarette.

“Well, you can step on out now,” Encinia replies.

Bland says that she doesn’t have to step out of the car, and the officer tells her to do so – several more times. He then opens Bland’s door.

“Step out, or I will remove you,” Encinia says. “I’m going to yank you out of here.”

Encinia reaches into the car.

Encinia tells her she is under arrest; she repeatedly asks why.

Cell phone video shows trooper pointing the weapon at her

Around now, Bland’s cell phone video begins, eventually panning around to show Encinia standing outside, but bent over and still reaching in with his left hand.

Both videos record their voices.

Bland: “Why am I being apprehended? You’re trying to give me a ticket for a failure …”

Encinia: “I said get out of the car.”

Bland: “Why am I being apprehended? You just opened my car door.”

Encinia: “I am giving you a lawful order.”

Encinia: “I am going to drag you out of here.”

Bland: “So you’re threatening to drag me out of my own car.”

Encinia now stands straight, reaches to his waist, pulls out what appears to be his Taser, and points it at her.

A weapon is pointed at Sandra Bland, her cell phone video of her July 2015 arrest shows.
The Investigative Network

Encinia: “Get out of the car!

Bland: “And then you’re going to stun me?

Encinia: “I will light you up! Get out!”

Bland has now gotten out of her car.

Encinia: “Get out of the car!”

Encinia: “Get over there!”

Bland walks behind her car and off the road, beyond the dashcam’s view. Encinia follows.

Her cellphone video shows Encinia standing right in front of her. He tells her repeatedly to get off the phone and to put the phone down.

She tells him she has a right to record, but the cell phone video ends shortly after Encinia tells her a third time to put the phone down.

Much of what happens next is not seen in the dashcam video, but the trooper can be heard saying that Bland is not compliant.

“When you pull away from me, you’re resisting arrest,” Encinia says.

A clearly upset Bland can be heard saying: “You’re a real man now. You just slammed me, knocked my head in the ground. I got epilepsy you mother******.”

A female officer tells Bland she should have thought about that before she started resisting.

In a bystander’s video, Bland says her head was slammed to the ground 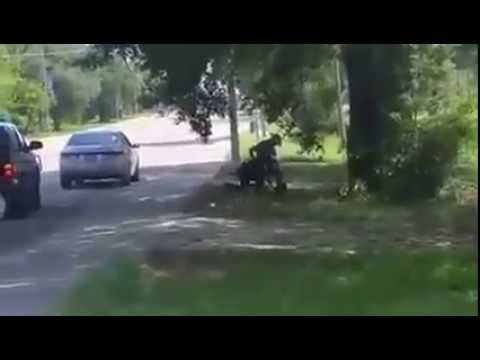 A separate bystander’s cell phone video of the arrest went public that month. By the time that video starts, an officer is using his knee to hold Bland on the ground.

“You just slammed my head into the ground. Do you not even care about that? I can’t even hear,” she can be heard saying.

The woman is further heard saying that she can’t “feel my arm” and that the trooper “slammed my f***ing head to the ground.” As the trooper and another law enforcement officer take her to a police car, she thanks the person recording the video.

Encinia, in his statement, wrote that Bland at some point was “swinging her elbows at me and then kicked my right leg in the shin.”

“Force was used to subdue Bland to the ground, to which Bland continued to fight back,” he wrote.