The red clay, the sliding players and the Eiffel Tower in the distance are familiar sights at the French Open.

But something less well known might see a reprise this year – an underarm serve or two, 30 years after Michael Chang’s infamous shot at Roland Garros.

It appears tennis is seeing a rise in the unorthodox serve, sparked by Nick Kyrgios’ underarm effort in his highly charged win against Rafael Nadal in Acapulco in February.

But it was the 17-year-old Chang’s cheeky serve to bamboozle behemoth Ivan Lendl, the world No.1, in the fourth round in 1989 that remains the benchmark.

“It obviously surprised him,” American Chang told CNN Sport. “But I think it shook him up a bit because after that point, it became not just a physical battle but a mental one as well.”

The ever controversial Kyrgios also struck the underarm serve at March’s Miami Open and throughout the buildup to the French Open, including on the first point against Daniil Medvedev in Rome’s first round.

Others, including France’s Pierre Hugues Herbert and Romania’s Monica Niculescu, followed suit as they sought to take their opponents by surprise. Then in the first round in Paris Monday, Alexander Bublik – no stranger, either, to the serve – used it and lost the point against Rudolf Molleker.

“Obviously they see one person do it and (think) ‘It’s not bad if I do it,’” Kyrgios told tennis journalist Ben Rothenberg in an NCR podcast which aired a day before he was defaulted at the Italian Open for losing his cool. 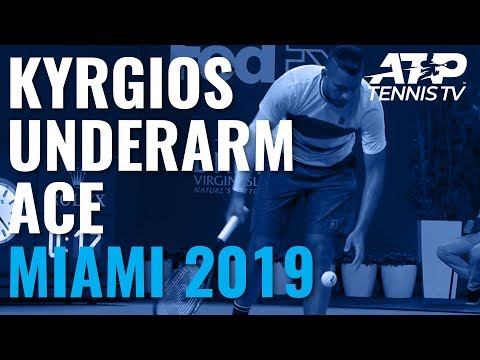 For Chang, who was being tormented by cramps at the time, it opened the door to one of the biggest upsets in tennis history and he went on to beat Stefan Edberg in the final to become the youngest men’s grand slam winner in the Open Era.

“I played 16-plus years on tour, and even that in itself went by very fast. So the French Open has always been very vivid in my mind and certain aspects, it’s almost like it just happened yesterday.”

‘Spur of the moment’

Chang, whose parents grew up in Taiwan, recalls being glued to the television that fortnight watching the protests unfold in Beijing’s Tiananmen Square.

But on the court he was making history of his own.

Having won three French Opens, Lendl appeared to be easing into the quarterfinals after taking the first two sets 6-4 6-4.

Chang, part of a golden US generation in men’s tennis that included Pete Sampras, Andre Agassi, Jim Courier and Todd Martin, took the next two 6-3 6-3 to force a decider.

The odds were still against the quick counterpuncher, despite the shift in momentum. Lendl’s 13-3 record in his previous 16 grand slam fifth sets perfectly illustrated why he was considered the fittest men’s player of the era.

Chang led by a break at 4-3 but knew closing out the contest would be difficult, especially with those painful cramps. At changeovers, he didn’t dare sit down for fear of not being able to get back up.

“My serve was very soft at the time because I couldn’t really use my legs, just basically rolling my arm over,” said Chang.

“Being down 15-30 I was on the verge of losing serve again. I was thinking to myself, ‘I gotta hit something different here because sooner or later Ivan is going to pick up what he needs to do and I’m going to end up losing.’”

Chang’s serve landed deep in the service box, Lendl moved in to strike a forehand, but couldn’t place it into the corner. He had no other choice given his court positioning to keep moving toward the net.

Chang’s flat forehand passing shot clipped the net, making what would have been a difficult volley even harder. Lendl had no chance.

The avid fisherman reeled in his foe.

“Ivan being the professional that he is, he would have trained for every possible scenario, every possible circumstance, but this was something that was quite new,” said Chang.

“It was a bit unfortunate for Ivan that my pass happened to clip the top of the tape. It was probably even more annoying that it happened on top of having to return an underhand serve from a 17-year-old who was cramping.”

Television cameras caught one fan on center court with his hands on his face, shaking in apparent disbelief. Viewers around the world felt the same.

“The crowd went absolutely nuts,” said Chang. “I was pumped up because I was just like, ‘Hey, let’s sneak out this game,’ because it was a big difference in being 15-40 or 30-30. From then on it seemed like the tide turned in my favor. I can’t explain why it did but for some reason it did.”

To his credit, Lendl – regarded by many as emotionless and a “robot” – avoided sour grapes. He instead praised Chang, telling reporters he showed “a lot of courage.”

The pair didn’t see each other in the locker room but did bump into each other several weeks later at Wimbledon’s practice venue.

“I’m still 17 years old, he’s still No. 1 in the world and I’m like, ‘What is he going to say?’” said Chang. “I kind of kept my head down and walked to the side and he didn’t have any of it. He was bee lining toward me. I was like, ‘I can’t avoid this now,’ because there was this little walkway where it’s only maybe 12 steps wide.

“So he walks up straight toward me and I was like, ‘How are you doing?’ He put his hand out, looked me straight in the eye and shook my hand and goes, ‘Michael, incredible job at the French Open. Congratulations.’

“When you see him today and on the tennis court, he’s very serious, very professional, very intense, very much that mentality. But off the court if anybody knows him, very different. Likes to be humorous, talking a lot, engaging a lot.”

Thirty years on, Lendl still doesn’t harbor any ill will toward Chang and his use of the underarm serve.

He joked that he had seen plenty of underarm serves in the 12-and-unders.

“Michael played well, fought hard and deserved to win,” he told CNN. “I didn’t and still don’t view it as a problem. Michael was one of the nicest people of that era and I don’t believe he would do anything unfair.”

And besides, said Lendl, the unusually early exit from Roland Garros allowed him to get more preparation time for Wimbledon.

Played his best at Wimbledon

Even though he didn’t win at SW19 in 1989 – Wimbledon was the lone grand slam title to elude Lendl – he stretched eventual champion Boris Becker to five sets in a semifinal where the German benefited from a rain delay.

“I played my best that year,” said Lendl.

“That’s why I skipped Roland Garros the following year and spent four weeks in Australia getting ready for the grass-court season.”

Chang never hit another underarm serve in his career, nor was he ever on the receiving end. Lendl did hit some when the returner “was on the back fence” but not many.

Chang, however, did topple Lendl in their only other best-of-five set clash at the 1991 Grand Slam Cup in Germany on carpet, a surface now virtually extinct in tennis.

Nowadays, they both continue to coach. When they chat, it’s about golf, their families – Lendl has five daughters and Chang two – and the players they work with.

“I’ve always had the utmost respect for him, not only as a professional but as a person,” said Chang.