Elizabeth Warren understands something very important about the 2020 race

(This is the 13th edition of our power rankings of Democrats most likely to get their party’s presidential nomination in 2020.)

No matter how many times you have heard it – and no matter how cliche it is – this phrase always bears repeating: The presidential race is a marathon, not a sprint.

It’s easy amid the wall-to-wall coverage of each day on the trail to lose sight of this reality. Every utterance, every new poll, every campaign rally is analyzed within an inch of its life.

But for the average person, the 2020 Democratic race is really just beginning – and what’s happened up to this point is, generally speaking, either ignored entirely or taken into only slight consideration.

Witness the fall and rise of Sen. Elizabeth Warren of Massachusetts. She had a disastrous end of 2018, as – in hoping to put questions about her claims to Native American heritage behind her – she released a video that she hoped would clear things up. It did the opposite.

She became a punch line for, among others, President Donald Trump. Observers – including us – who had rated Warren as one of the two or three people most likely to be the Democratic nominee dropped her out of the top five.

But Warren understood that where she was in February 2019 mattered far less than where she would be in February 2020. So she started to build and roll out a series of detailed policy proposals designed to put the Native American flap behind her (again) and carve out space as the race’s resident policy wonk.

Mission accomplished. Warren is back in the top four in this week’s CNN 2020 rankings, thanks to a series of strong polls and the growing sense that she is very much back in this contest.

Below, Warren and the other nine candidates we consider most likely to wind up as the Democratic nominee against Trump in fall 2020.

10. Andrew Yang: Yes, the man who has built his campaign on the idea of giving every person aged 18-64 in the country $1,000 a month is a long shot. A long long shot. He’ll tell you as much if you ask him. But Yang is now one of only 13 candidates to meet both the polling and donation requirements to make it into the first two presidential debates. And given his small-dollar donor base, he is well on his way to qualifying for the third debate too. How many politicians who started the race in far superior positions to Yang can make that claim? (Previous ranking: 10)

Inside the internet-fueled rise of Andrew Yang 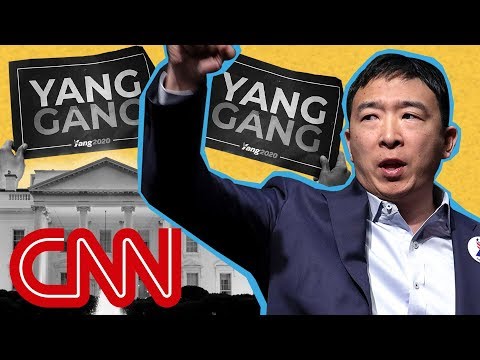 9. Steve Bullock: If there’s one candidate who may fall off our top 10 list next time, it very well could be Bullock. The reason is pretty simple: He may not make the debates at the end of June. According to a CNN analysis, Bullock still has not met either polling or fundraising qualifications. If voters aren’t able to hear (what we think is a pretty strong pitch for) why Bullock should be president, then he won’t be able to overcome low name recognition. (Previous ranking: 9)

8. Amy Klobuchar: The senator from Minnesota may have said a little too much when she told an Iowa crowd that the late Sen. John McCain (R-Ariz.) just kept reciting the names of dictators during President Donald Trump’s swearing-in. The McCain family asked her not to invoke his name in a political context and Klobuchar responded that she has “deep respect” for the family. It’s clear Klobuchar was trying to cozy up to the centrist legacy of McCain and got burned. Not a huge deal, but an example of the perils of being a first-time national candidate. (Previous ranking: 6)

7. Cory Booker: We’ve pushed Booker up for two reasons. The first is that it’s pretty clear now that the junior senator from New Jersey is making Iowa his make-or-break state. That’s smart, because the only way a candidate is going to break through in this large field is by doing well in Iowa. Despite some Democrats wanting to look past Iowa, the first-in-the-nation contest will still matter hugely. Second, Booker does seem to be consistently holding on to 2% to 3% in the polls. That puts him slightly above Klobuchar. (Previous ranking: 8 )

6. Beto O’Rourke: Here’s the bright side for the former congressman from Texas: He hasn’t gotten any good press since almost the minute he’s entered the 2020 race and he’s still tied for fifth place – with 5% support – in the latest CNN national poll on the 2020 race. The downside? O’Rourke hasn’t received much good press because he just hasn’t done much of anything to move the needle or shake the impression that he is an entitled dude who thinks being president (or at least running for it) is his destiny. (Previous ranking: 7)

5. Pete Buttigieg: Buttigieg has come a long way since the beginning of the campaign, but it’s pretty clear now that he has faded in the polls. CNN’s most recent poll had him at just 5% nationally, after he hit the high single digits to low double digits in a number of surveys. Buttigieg’s support has mainly come at the expense of Warren, with whom he shares a similar coalition of college-educated white voters. (Previous ranking: 4)

4. Elizabeth Warren: See above. Warren has been the steadiest candidate in this race – on message to a fault, comfortable in her own skin, charismatic – for the last several months. She’s on an upward trajectory. (Previous ranking: 5)

3. Kamala Harris: The junior senator from California has been as steady as they come in the polls. She’s consistently polled in the high single digits since hitting an apex after her announcement. We like consistency, because it demonstrates a clear base of support within the electorate. Harris also probably has the best chance of forming a primary coalition of white college-educated voters and African Americans – just like Hillary Clinton did in 2016 and Barack Obama did in 2008. (Previous ranking: 3)

2. Bernie Sanders: The senator from Vermont has settled into a solid second – well behind Biden in national polling but comfortably ahead of everyone else. (Sanders took 18% in the latest CNN national 2020 survey.) What Sanders will, eventually, have to grapple with is the fact that out of the top four candidates, three – including him – are running for the title of most popular liberal. Can he beat Warren and Harris in that primary within a primary before he takes on Biden? (Previous ranking: 2)

1. Joe Biden: At this point, Biden is the only candidate polling greater than 20% consistently (let alone greater than 30%, which he is also doing). Biden is being helped by sporting the best favorable ratings among the general electorate, which is key in a year in which electability is at the top of voters’ minds. The question we have is, can Biden withstand the attacks coming his way? For instance, he came under heavy fire this week for saying he’s still against federal funding for abortion – a position that puts him at odds with most of his competitors. (Previous ranking: 1)